Regular readers will know that I am an NFL fan. I collect NFL stuff in addition to NASCAR stuff. I have several toss coins, an endzone pylon, and some turf. I’ve had jerseys and helmets over the years as well. I recently found something that I just had to purchase.

The world of football was a much different place in 1964. There were two leagues, the NFL and the AFL. The first Super Bowl between the two wouldn’t take place until 1967. In 1964, the AFL consisted of a total of 8 teams in two divisions. The Eastern Division was made up of The Boston Patriots, The Buffalo Bills, The Houston Oilers, and The New York Jets. The Western Division had The Denver Broncos, The Kansas City Chiefs, The Oakland Raiders, and the San Diego Chargers. The 1964 AFL Championship took place at the War Memorial Stadium in Buffalo, New York. The game saw the Buffalo Bills beat the San Diego Chargers 20-7.

The 1964 Oakland Raiders were not a great team. They went 5-7-2 over 14 games. They had a couple of all-stars but really didn’t do much. These are a set of pages from the playbook of former wide receiver Bill Miller. They are in good condition, and don’t show any wear. 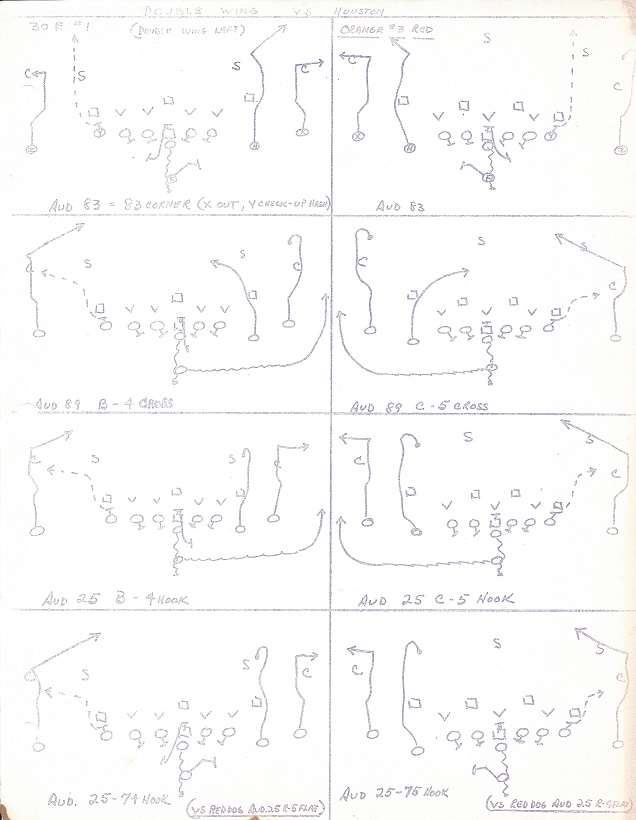 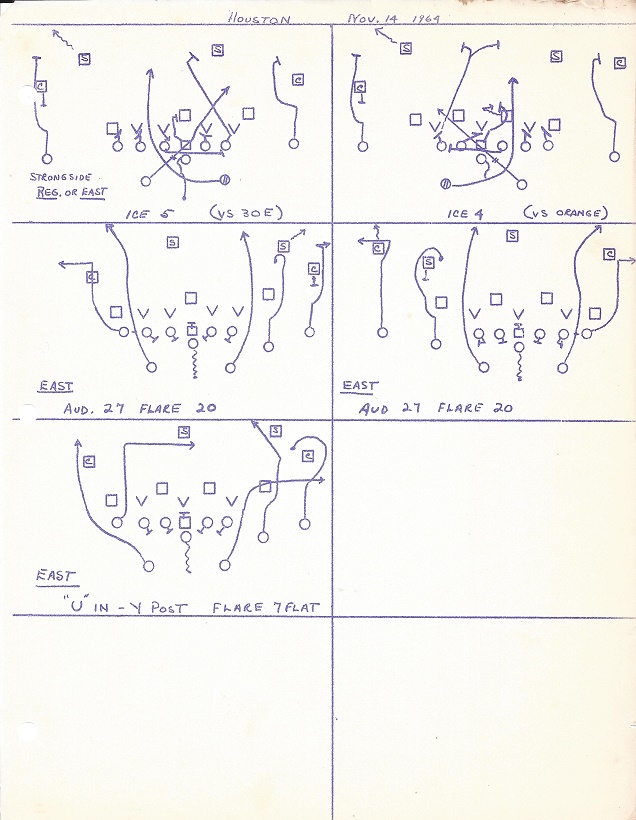 Next week, how I spend my summer vacation.

I love exploring and discussing the lesser-known aspects of driver suits, and one thing that most fans don’t get to see are the cuffs are the end of the legs. In NASCAR, that is because there is a design feature in suits called the “boot cut.”

As seen above, the boot cut features a cuff within a cuff. In NASCAR this is not just for aesthetic reasons. NASCAR, and other stock car classes feature the engine in front of the driver. In the very likely event of an engine catching fire the cuff helps keep the driver’s legs protected.

The other style of cuff is just called “cuff.” I’m going to call it a standard It is a predominant feature seen in many suits, including F1 and IndyCar suits. Since the engine and fuel tanks are located behind the driver, and because of the restricted space within the driver compartment, the cuff style is a popular choice. On occasion, cuff cuts can be seen on NASCAR suits as well. Early NASCAR suit feature cuff cuts, but in the 1980’s, the boot cut became the preferred choice. 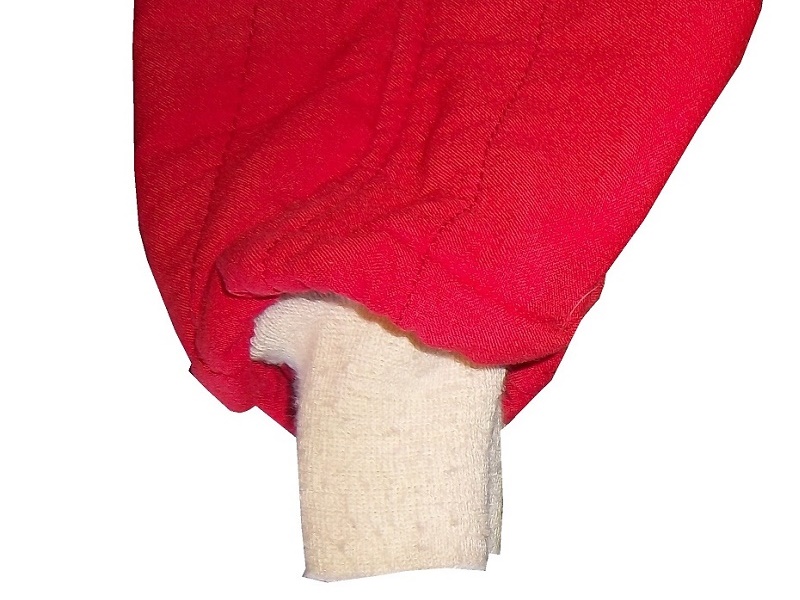 In the NHRA you see it a lot in the upper echelons, Top Fuel, Funny Car, and Pro Stock. I also see it in the semi-pro ranks. For drivers in other classes, as in different sanctioning bodies, it is left up to the driver. Some drivers prefer the standard cuff, some prefer the boot cuff.

Next week, something really cool…

The nature of racing media has changed. Traditional media is still present, but there are so many new ways of delivering the news, that it seems that changes happen almost every race. One thing that isn’t as previalnt anymore is wire copy. Wire copy is news sent via wire to news rooms. The news room will then take the wire copy, and edit it for broadcast. The old AP wire system would send news on everything from politics to sports. With newer technology comes better ways to transmit news.

The 1988 12 Hours of Sebring was rather uneventful. Klaus Ludwig and Hans-Joachim Stuck won the race driving over 1,300 miles in a Porsche 962 for Bayside Disposal Racing. There were some other events, both at the track, and in the news, with the murder of Mickey Thompson and his wife orchestrated by business partner Michael Frank Goodwin. These are some wire notes from throughout the weekend. They are incomplete, and show heavy wear. 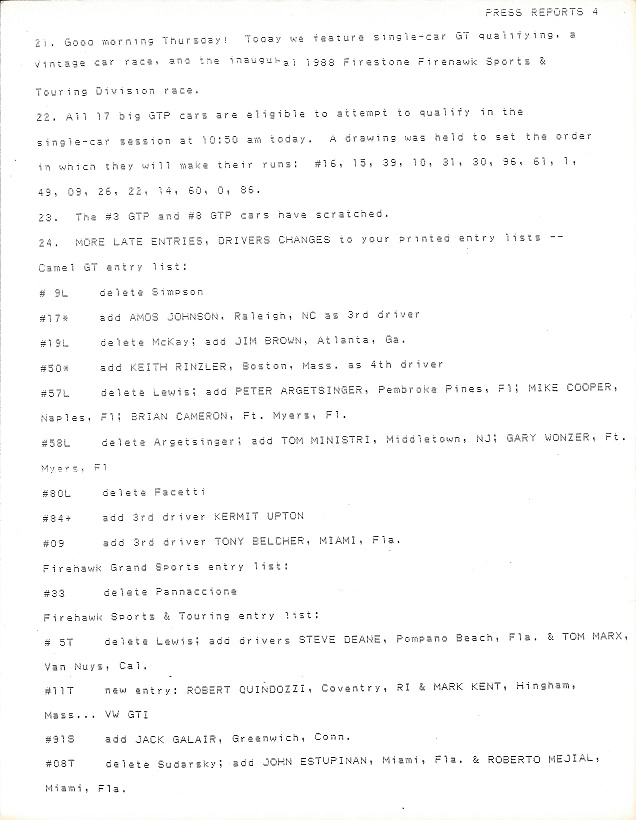 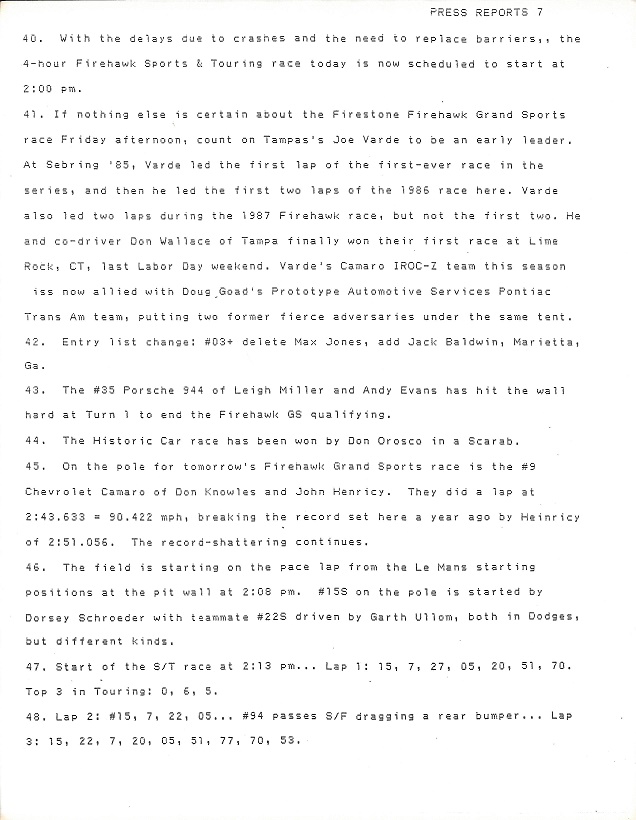 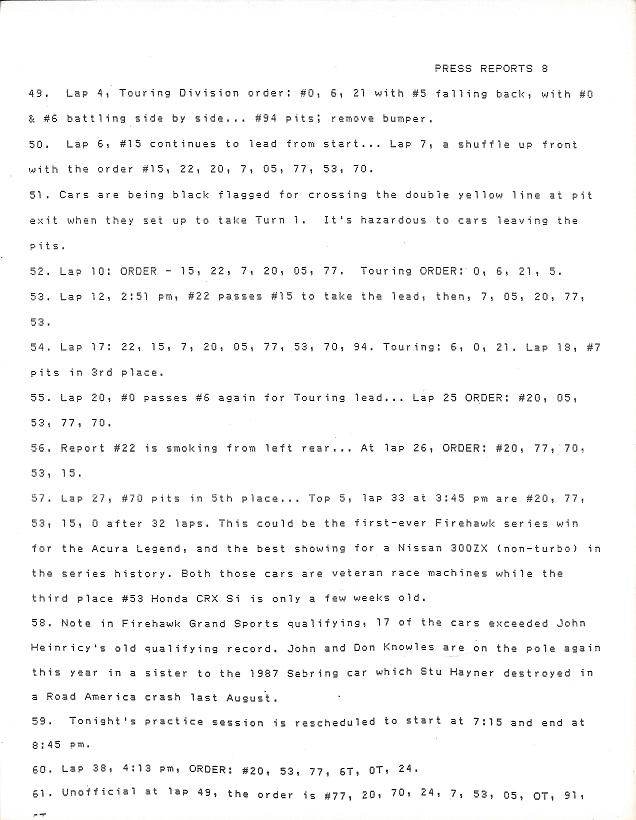 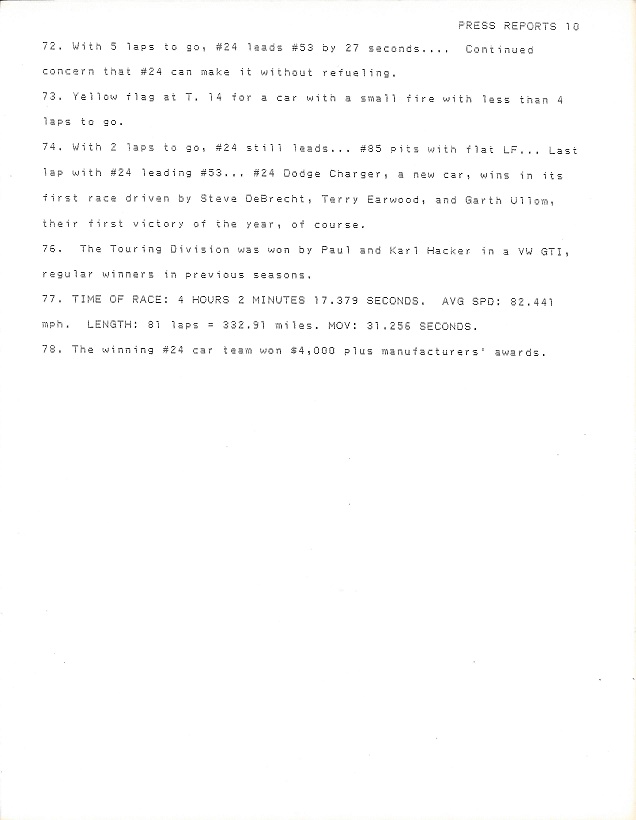 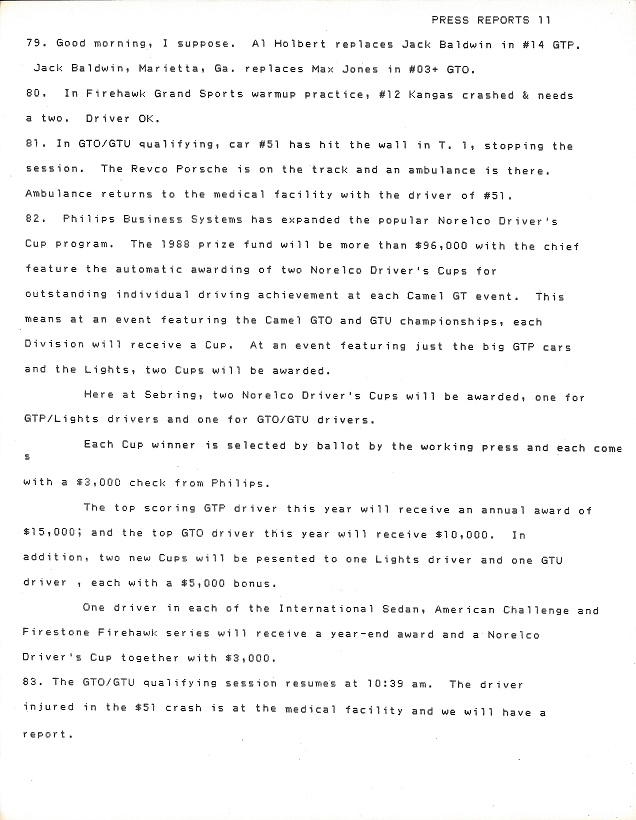 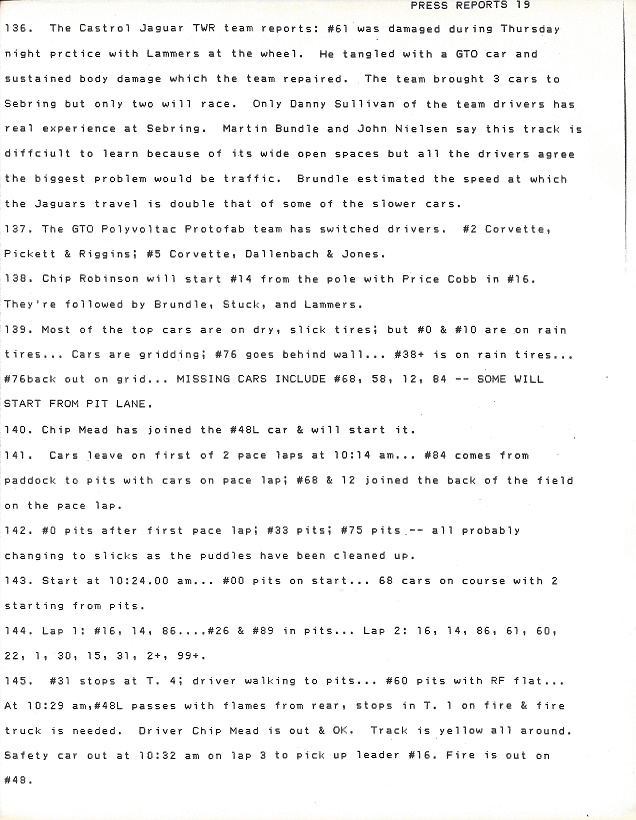 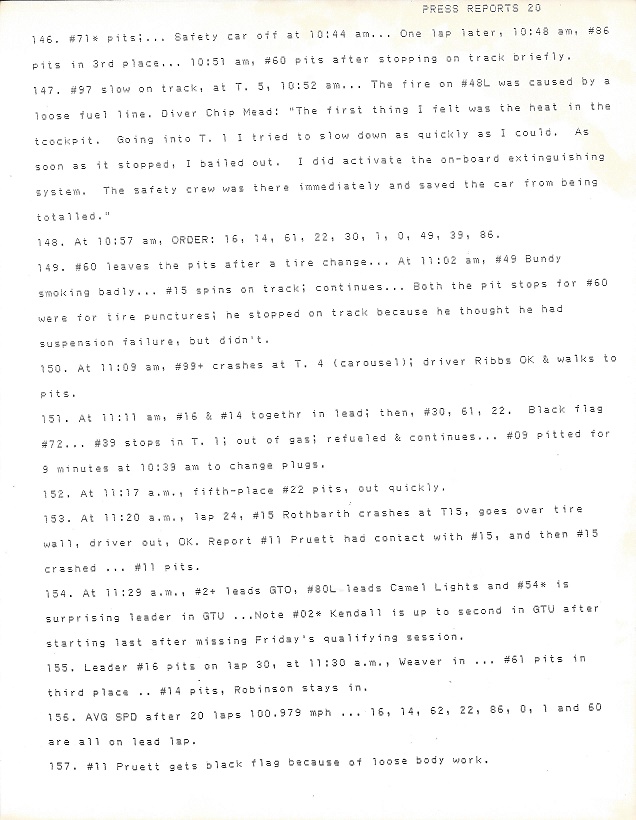 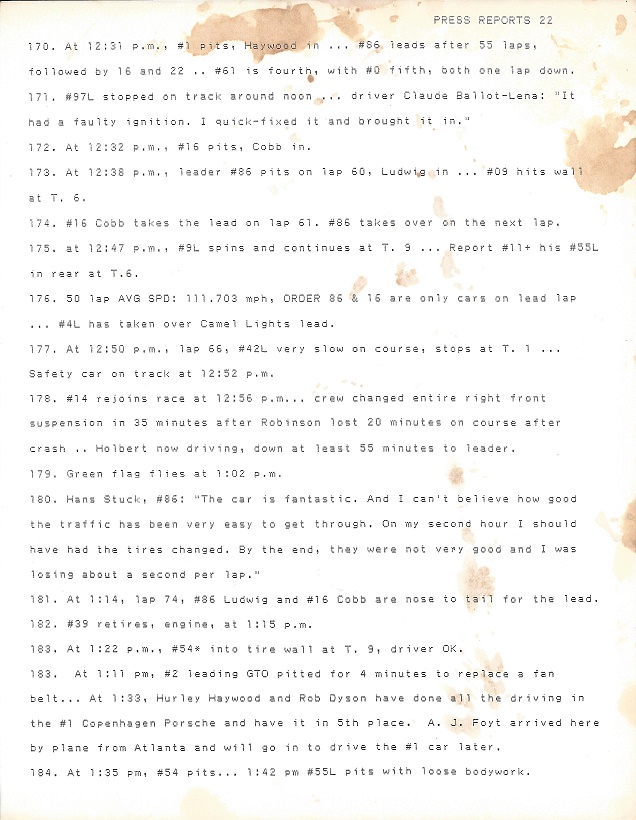 Next week, I revisit a classic article. 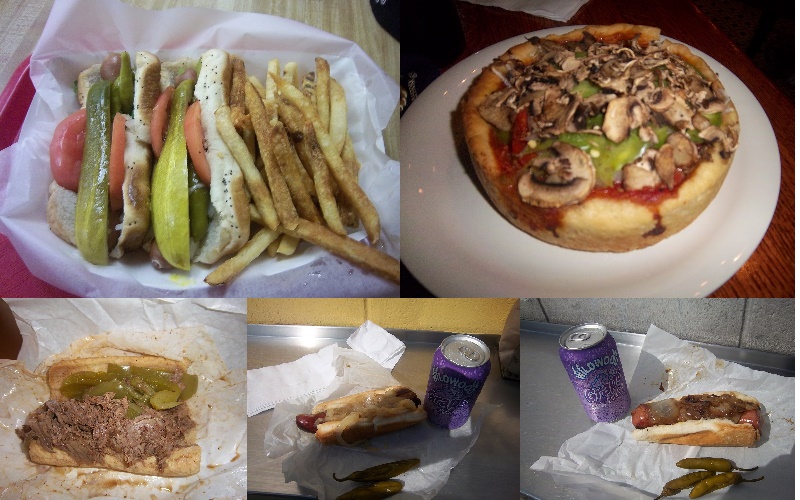 Chicagoans are passionate about their city, their sports, and their food. Whether you are enjoying a Cubs game with an Old Style and a Maxwell Street Polish, or a White Sox game with a large slice of Pizzeria Uno, with some Goose Island, food is an integral part of the Chicago experience.

Now a true Chicago-style hot dog has a water simmered or steamed Vienna Beef hot dog on a S. Rosen’s Mary Ann bun. The high-gluten bun is meant to stand up not just to the toppings, but also to the steaming or simmering of the dog. Topping the dog you have yellow mustard; chopped white onions; bright green sweet pickle relish; a dill pickle spear; tomato slices or wedges; pickled sport peppers; and a dash of celery salt…a real drag it through the garden experience. 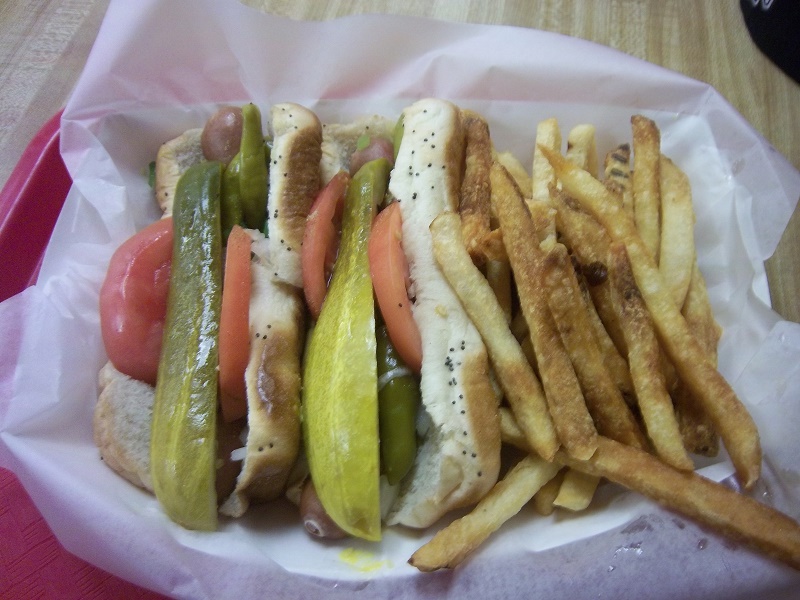 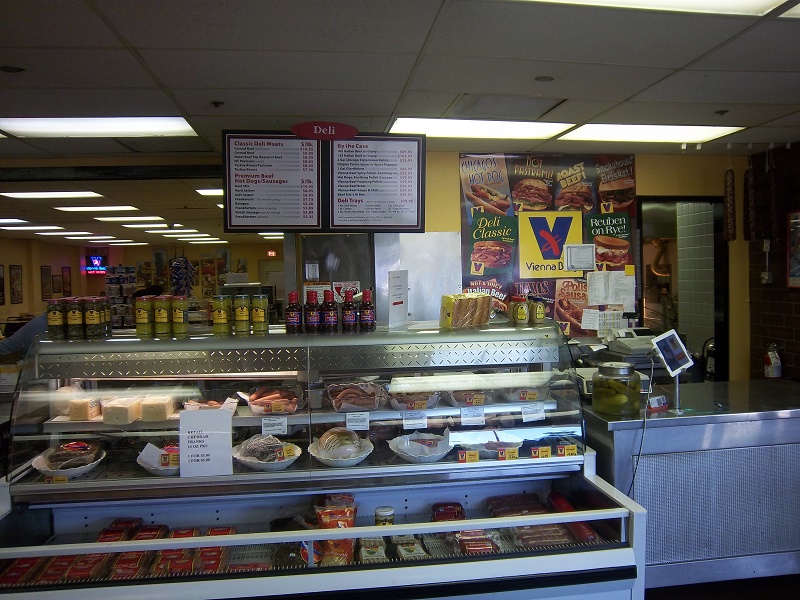 The next stop is Uno Chicago Grill. Located in the River North Neighborhood at 29 East Ohio street, this mecca for Chicago-Style Pizza fans is the originator of Chicago-Style Pizza. This location is the place where it was born. Founded in 1943 by Texas football star turned business man Ike Sewell, the restaurant has been synonymous with Chicago since the beginning.

Chicago-Style Pizza is just as synonymous with Chicago, if not more. Like Chicago-Style hot dogs, Italian beef, and Maxwell Street Polish sausage, it is treasured by Chicagoans and although sold in many other cities, it is perfect when enjoyed in the Chicago area.  The most traditional way to order a pizza is the “Numero Uno” which features fresh Italian Sausage, pepperoni, mushrooms, green peppers and onions. The crust is much thicker than most pizzas, and is baked somewhat before the toppings are added. When the toppings are put on, cheese goes on the bottom, the toppings are added second, and then the sauce is added on top of the toppings. Stuffed pizza is a variation where after the toppings, a layer of dough is added on top before the sauce.

Now for another Chicago favorite, The Maxwell Street Polish Sausage. Chicago has one of the biggest Polish communities in North America, and this classic staple comes from Chicago’s Polish Heritage. The Mecca for this particular Chicago favorite is located near the Dan Ryan Expressway.

The traditional way to cook a Maxwell Street Polish Sausage is to flat-grill a 1/3 piece of Polish sausage, typically made by Vienna Beef or Bobak. To assemble the sandwich, bright yellow salad mustard is coated on the inside of a hot dog bun, then the Polish sausage is placed inside. On top of this, grilled onions are added. The sandwich is rolled in paper with some hot sport peppers, and placed in a paper bag with fried. This is traditionally enjoyed with a Wildwood Grape soda.

Located next door to Jim’s Original is The Express Grill. 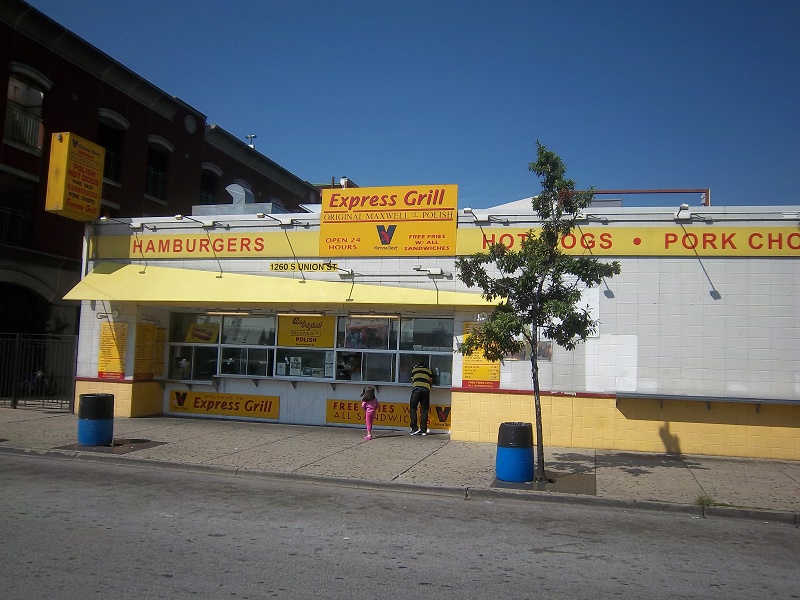 Both of these outdoor sausage stands have no seating area, just a metal stand to rest your food on while you are eating, while the unmistakable scent of Polish sausage and grilling onions fill the air. Both locations are mirror images of each other, and have identical menus, products and prices. The taste is one of a kind, and when you eat there, you are eating a piece of Chicago history.

Last, but certainly not least is an Italian Beef sandwich. While there are a number of differing stories concerning the origins of Italian Beef, there are two commonly accepted stores. The first is that many Italians who worked in the stock yards of Chicago created the recipe to make inexpensive tougher cuts of beef that they brought home from work much more palatable. Another commonly accepted theory is that the method was created for weddings to make a roast last for all attendees to enjoy. Regardless of how it came to be, the best place is Al’s Italian Beef.

Italian beef is made of seasoned roast beef, sliced very thin, and simmered and served au jus and a combination of garlic, oregano, and a series of mix of ingredients. After preparation, the beef is placed on an Italian-style roll. The bread is often dipped into the au jus the meat is cooked in. Italian beef sandwiches are typically topped off with Chicago-style giardiniera or sauteed, green Italian sweet peppers. Giardiniera is an Italian or Italian-American relish made from pickled vegetables in vinegar or oil. There are two types of giardiniera , hot and sweet. Many places that sell Italian Beef make their own giardiniera. Some places serve “gravy bread” which is simply a piece of Italian bread dipped in the au jus, which Chicagoas refer to as “gravy.”

Opened in 1938, Al’s #1 Italian Beef was opened by Al Ferrei, his sister Francis, and her husband Chris Pacelli Sr. They side with the wedding story for the origin of Italian Beef. When they realized that people really liked their beef, they started selling to local business and hospitals. Eventually, they opened a location on Taylor Street, since the demand for their food was high.

As you stand in the original Al’s, again, the sights and scents give you the felling that you are going to taste Chicago history. To enjoy an Italian Beef sandwich, Al’s recommends that you use the Italian Stance” in which your feet are 2 ½ feet from the counter, your elbows are on the table, and your mouth is wide open. They claim it is to prevent damage to your shoes. Here is what it looks like.

For all of Chicago’s problems, I still call it home!