Every year, I take a month-long vacation in the summer, which coincides with the NHRA Lucas Oil Route 66 Nationals. I love drag racing, and the Route 66 Nationals is the NHRA’s stop on the Mello Yello Drag Racing Series tour. I go with friends from work, and every year, we have a great time.

Mother Nature was not in the kindest of moods on Saturday. Friday Night Qualifying went off without a hitch. I did get to watch the Jeg’s All-Stars race their elimination races. 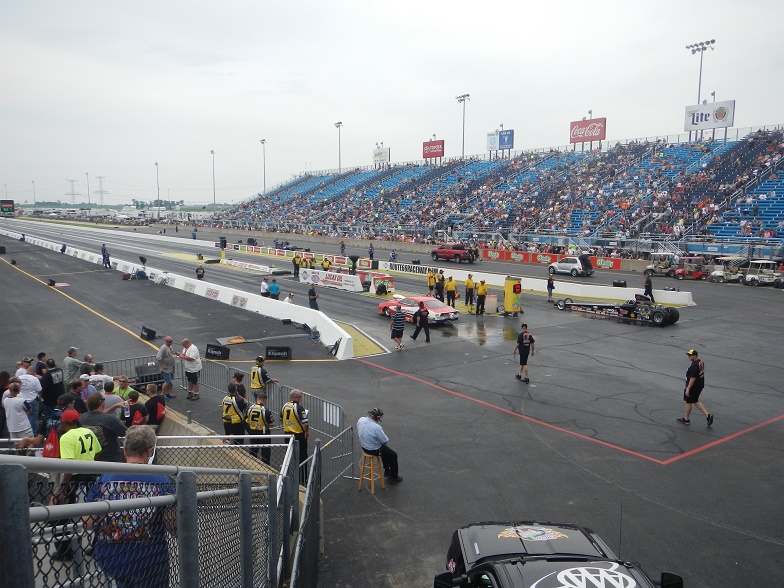 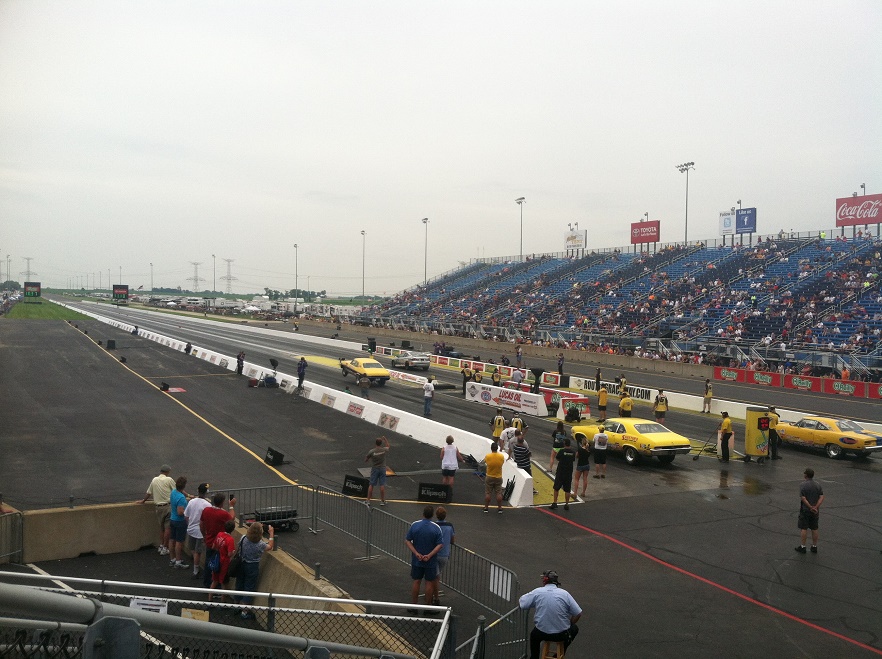 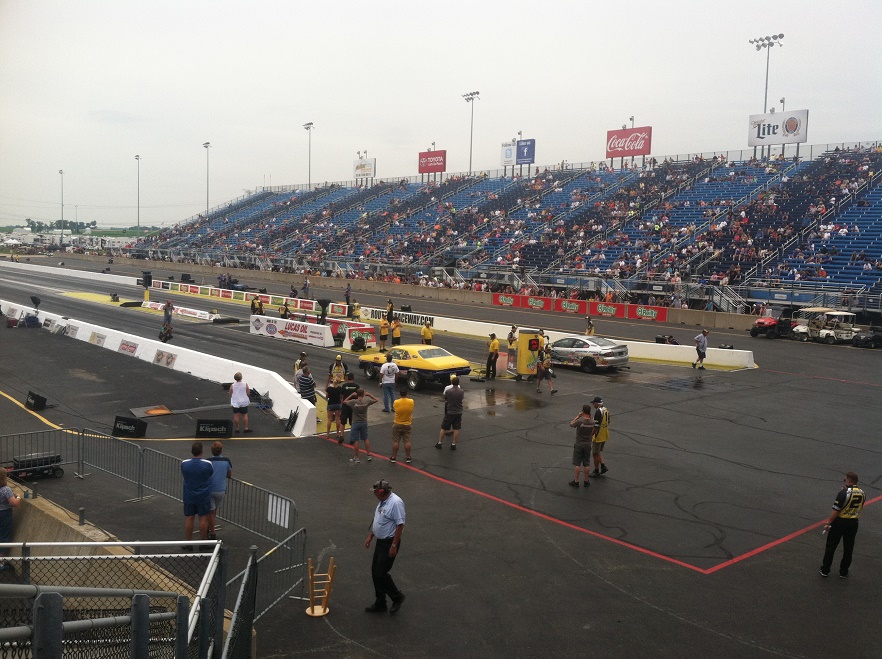 After the Jeg’s All Stars on Saturday, it began to rain. The rain continued to fall for several hours, during which time, I wandered around the pits. I got to meet Driver Suit Blog favorites Tony Schumacher 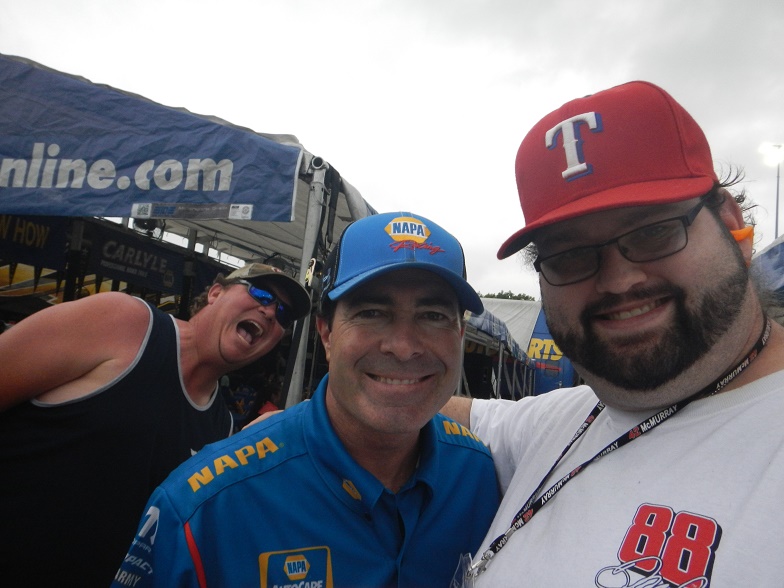 Every year, I get the chance to ask Tony Schumacher a question, and the video below is of how that went.

I got a #1 qualifier interview cap from The Thunder Valley Nationals on eBay, and I got it signed by Schumacher, Capps, Tommy Johnson Jr., Fast Jack Beckman, Erica Enders-Stevens, JR Todd, Alexis DeJoria, and John Force. 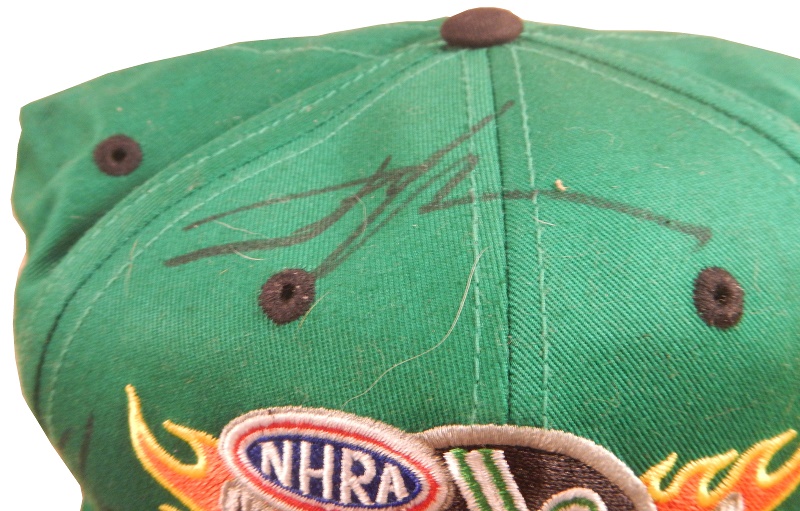 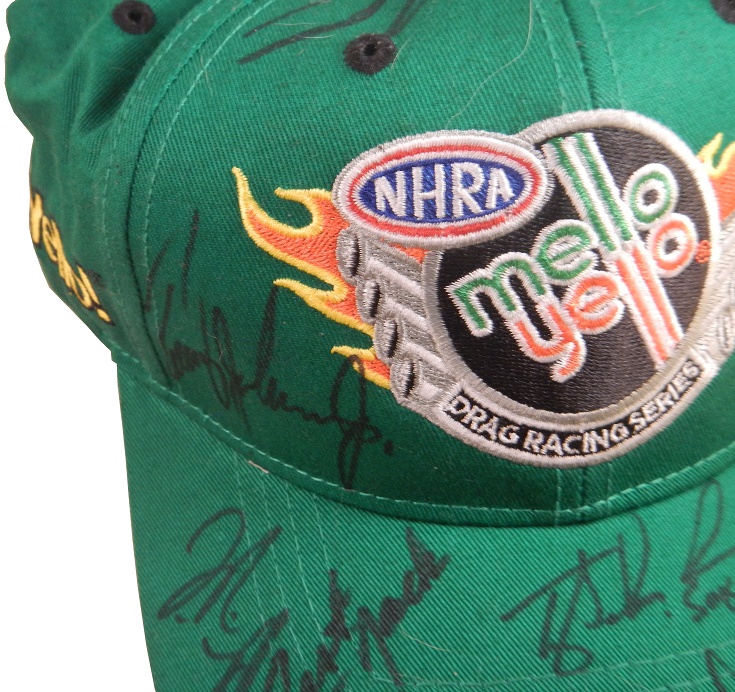 The story behind these interview hats is interesting. Mello Yello gives these hats out to drivers at events, and there are a series of different colors. For qualifying and round winners who don’t wear a sponsor hat after getting out of a car for an interview, they are given either a gray,

They are all of the same design. For the driver who qualifies #1, they are given a green hat, with a #1 Qualifier patch with their respective class. 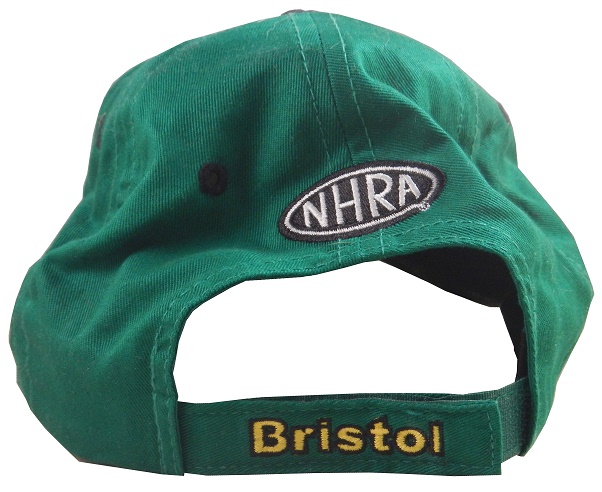 The drivers who win the event get a yellow cap, with a winner patch to wear, similar in design to the #1 qualifier hat.

The drivers who win the championship get a white hat. 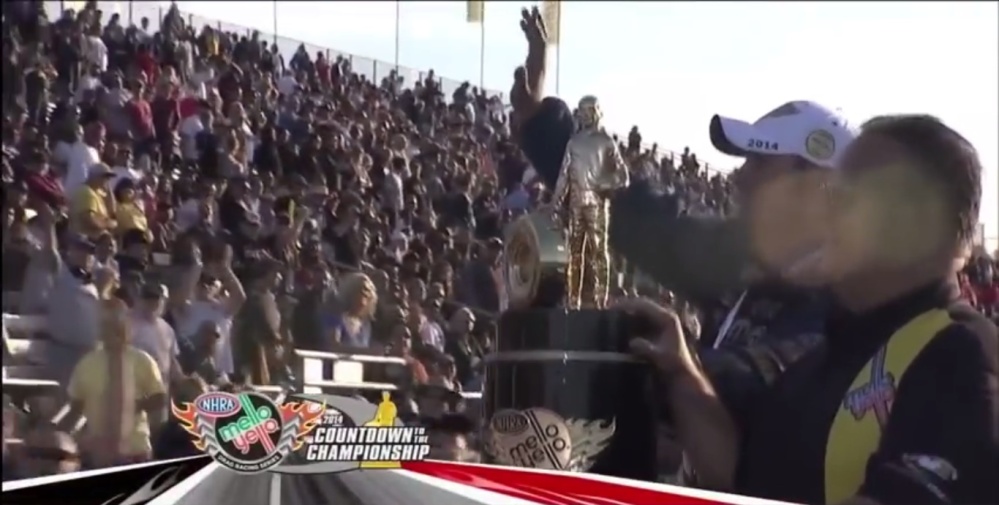 Drivers wear these hats during interviews, except for John Force who prefers to wear his own hat for an interview after he qualifies #1 or wins.

I also got one of Cruz Pedregon’s valve springs from his engine, 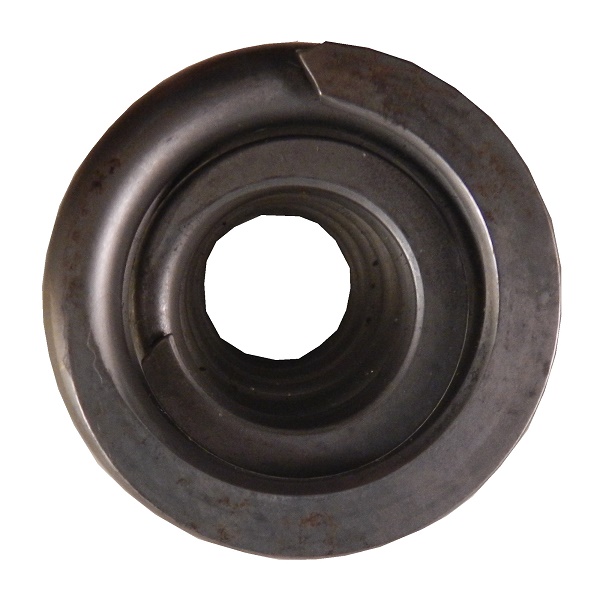 and a burnt hose cover.

This is a perfect example of why Nomex is the go-to material for driver suits. This Nomex hose cover went through a serious fire, and was burnt. Nomex isn’t fireproof, it’s fire retardant, which means it will burn, but much slower than most fabrics. It will burn, but will protect whatever it is covering from fire damage for a brief time. The easy way to see if the material has been compromised is if the fabric is discolored. Notice the areas of light on the black fabric, that means that area of the fabric has been compromised. 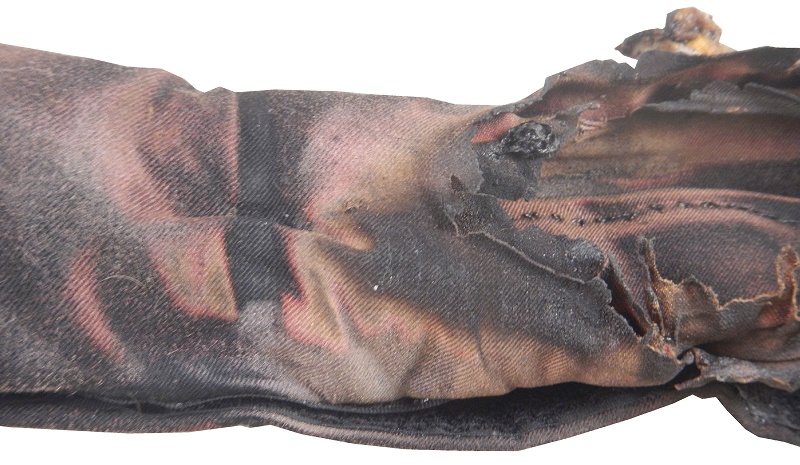 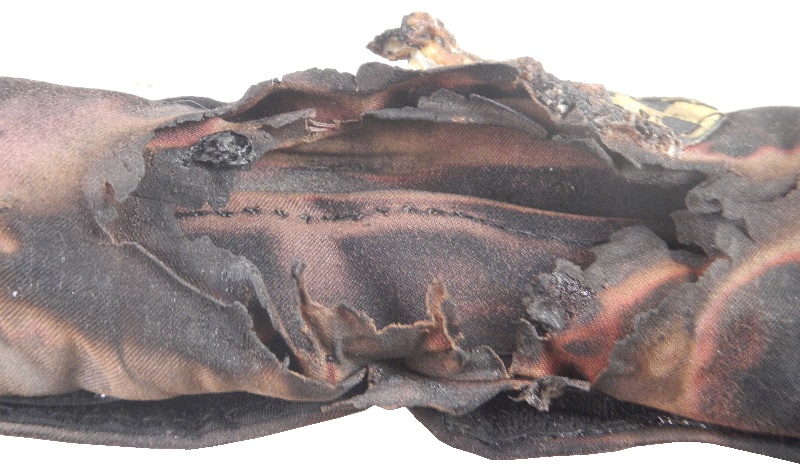 Driver suits, when burned, will show the same discoloration. Should the driver wear the suit, and suffer a similar fire, the suit won’t protect them, and serious burns can and will occur. It may seem like a waste, but countless drivers are alive and well today because of this property of Nomex.

After the rain subsided, and the track was dried, I got to watch round 3 of qualifying, which was supposed to happen at 1 pm, but took place at about 4 pm. It had a lot of good rounds, including TJ Zizzo’s explosion. We decided to go home after round 3, and as we were leaving, we saw the storm clouds were beckoning. 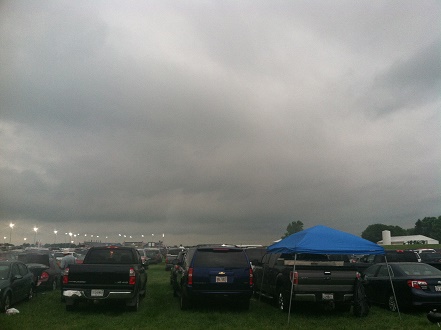 Round 4, which started after we left was canceled due to another rainstorm.

Sunday’s weather was much better. After the first two rounds, I wandered around the pits getting hero cards, and autographs. I got pictures with, and autographs from, Driver Suit Blog favorite Vieri “V” Gaines, 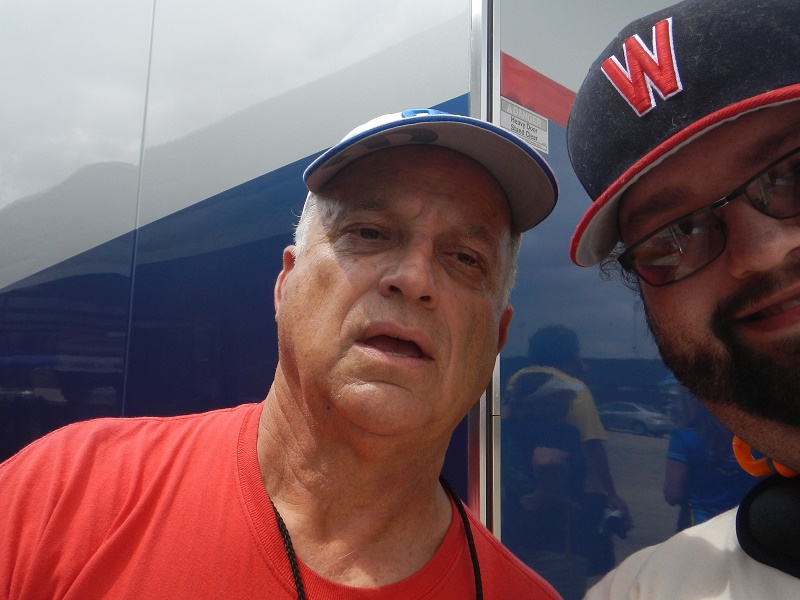 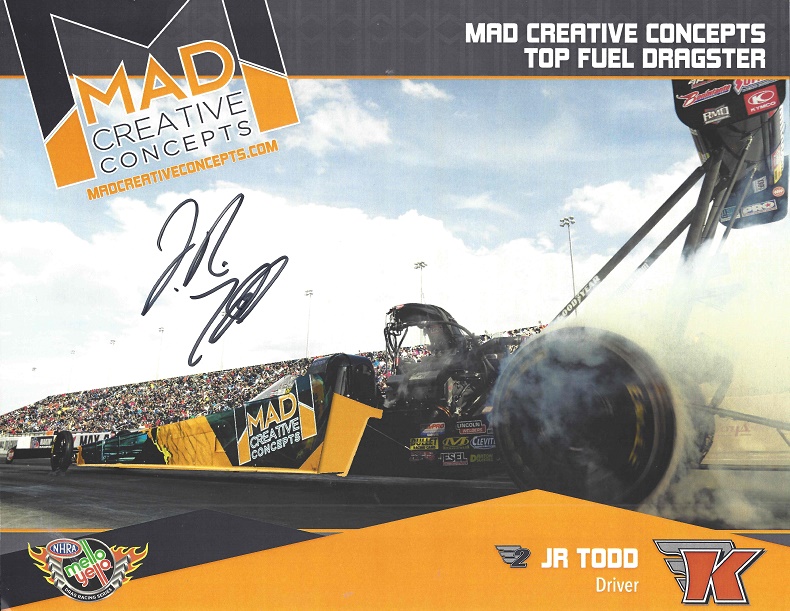 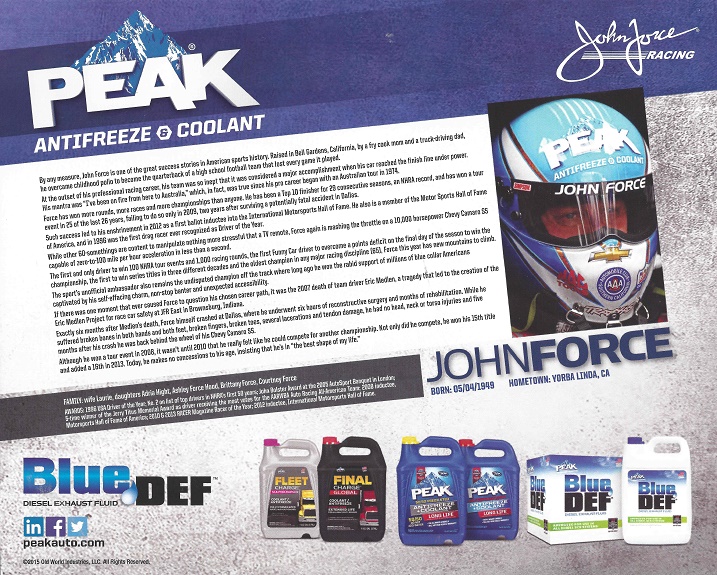 I filmed one of Antron Brown’s engine tests,

filmed some slow motion video, and got to see Solid Rock, a 1971 Ford Mustang funny car. 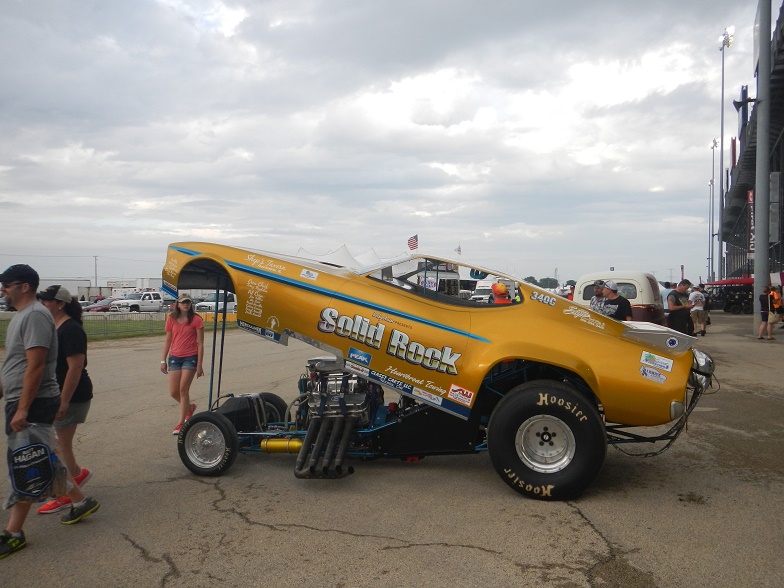 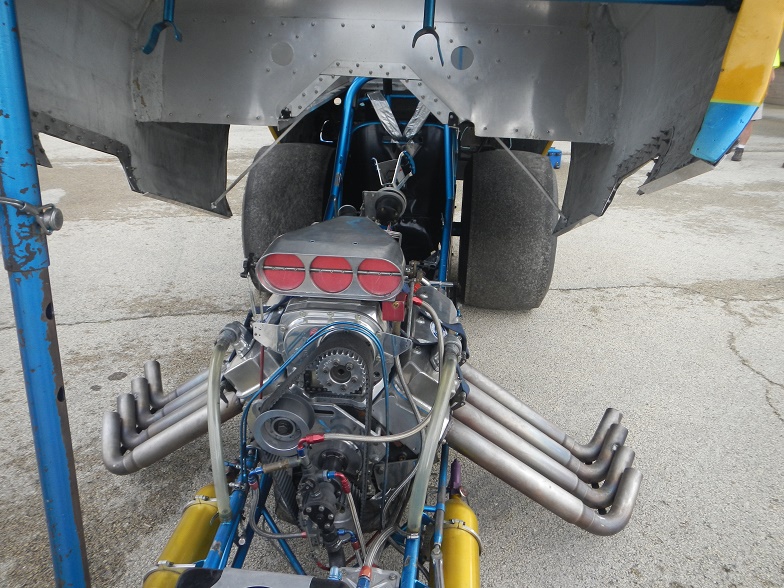 In the end, Tony Schumacher, Tommy Johnson Jr, Allen Johnson, and Hector Arana Jr. won their classes, I got a sunburn, and had a great time, and I can’t wait to go back next year.