The Vest Project is waiting taking a back seat this week, and will pick back up next week. As I teased on Tuesday, I went to the NFL Draft in Downtown Chicago on Thursday. I decided to trade Nomex for Polyester as I decided not to think about racing and driver suits for one day, and enjoy the festivities. I had a “seat-filler” ticket, so I had a chance to go in, but sadly, there were too many fillers, and not enough seats. So while I didn’t get to see any of the Draft itself, I did have fun wandering around Draft Town in Grant Park.

Draft Town was billed as a “900,000 square foot celebration of the Draft” and a “three-day football festival” and it was, but it was also a chance for the sponsors to put their names out there, and to promote their products. That is what it was, a football festival that was promoting products the entire time…Why else would the full name be Draft Town presented by Oikos Triple Zero. 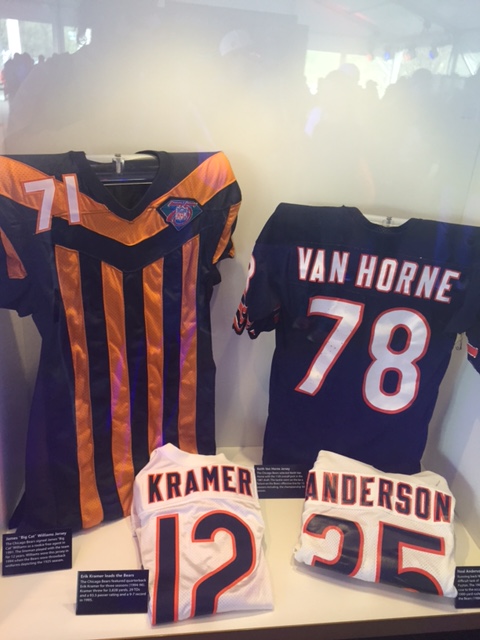 They also had the busts from the 2016 Pro Football Hall of Fame Class, and a display concerning the jacket and rings given to the inductees. 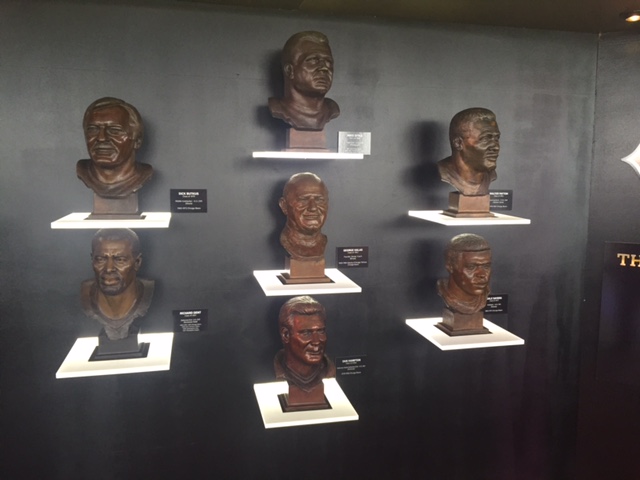 The best display there was the history of the Super Bowl Ring, which had examples of every ring from Super Bowl I-XLIX. I shot a video of them.

My next stop was the College Football Hall of Fame tent, which had its own display of game-used and historical items. 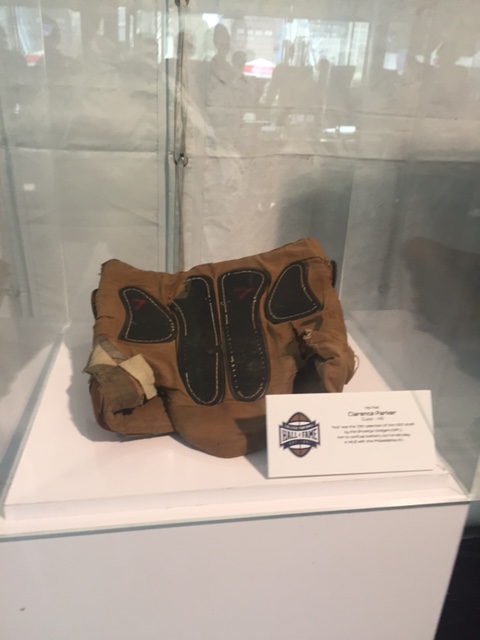 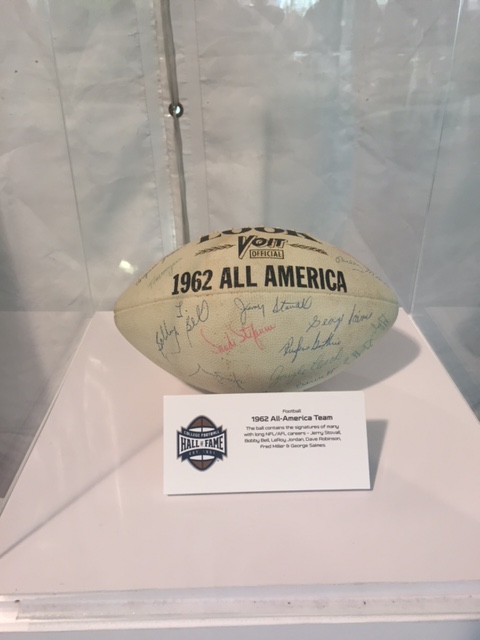 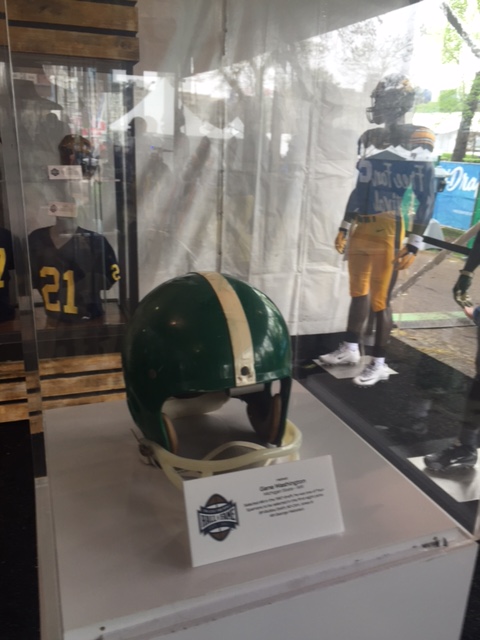 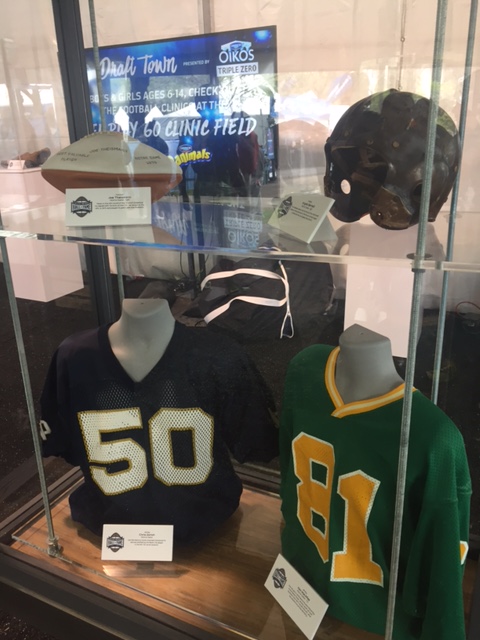 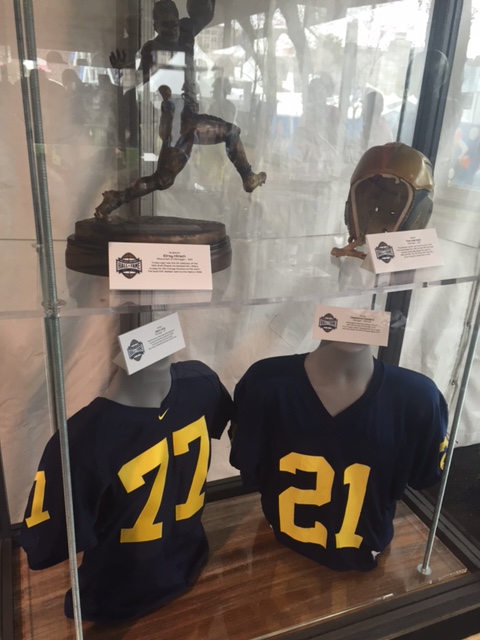 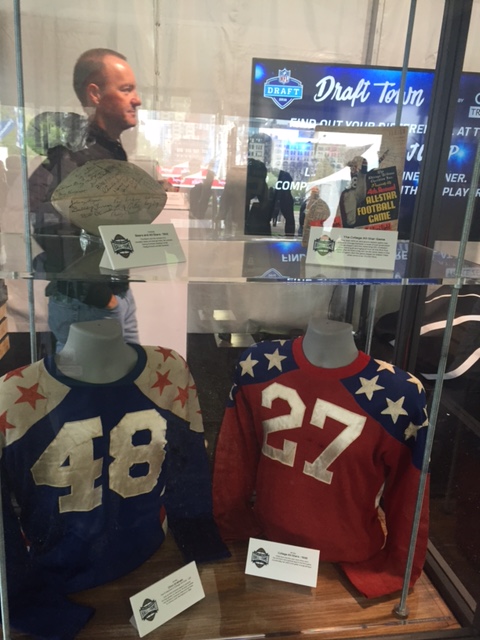 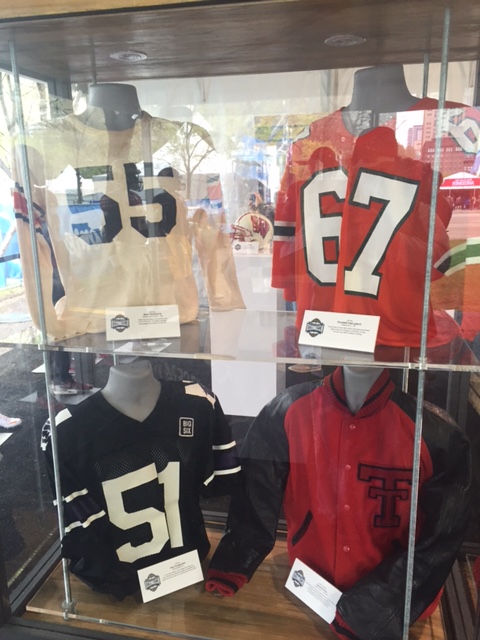 There were also a number of mannequins that were wearing various uniforms of collegiate teams. I do have to give them credit where credit is due. I thought they would all be Nike, but every manufacturer is represented. 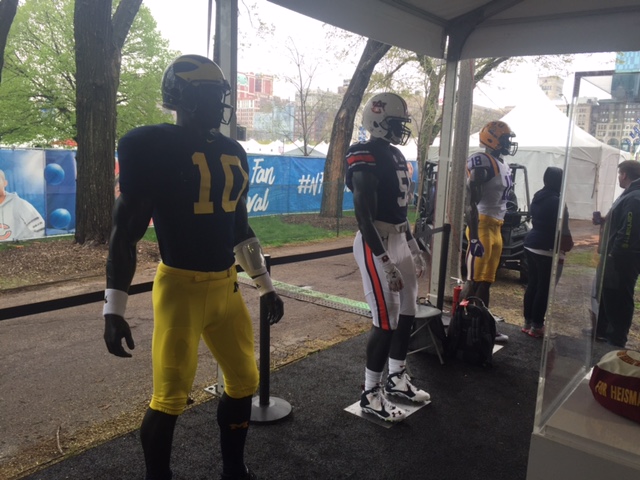 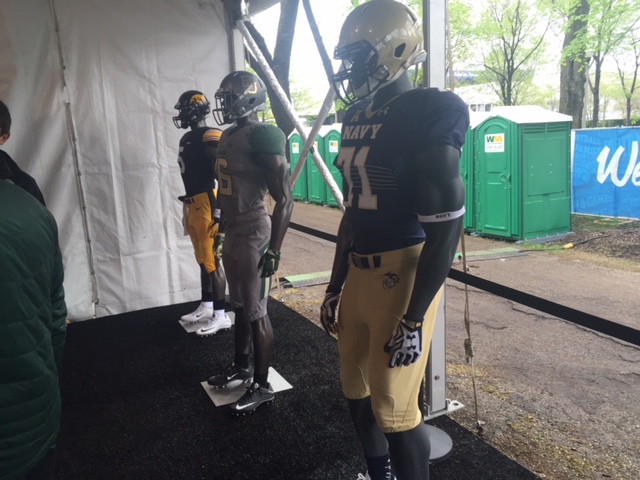 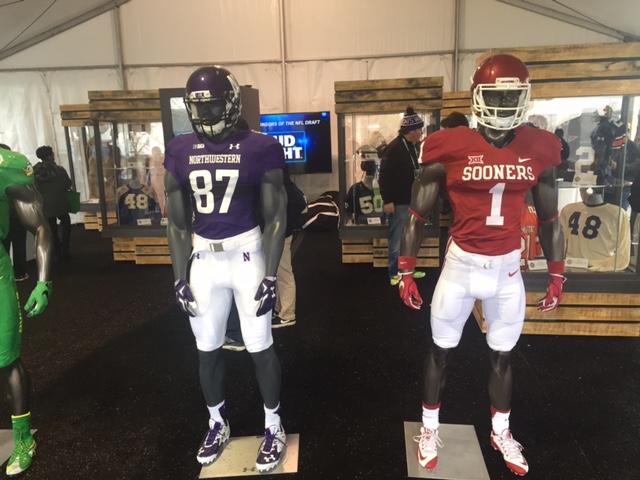 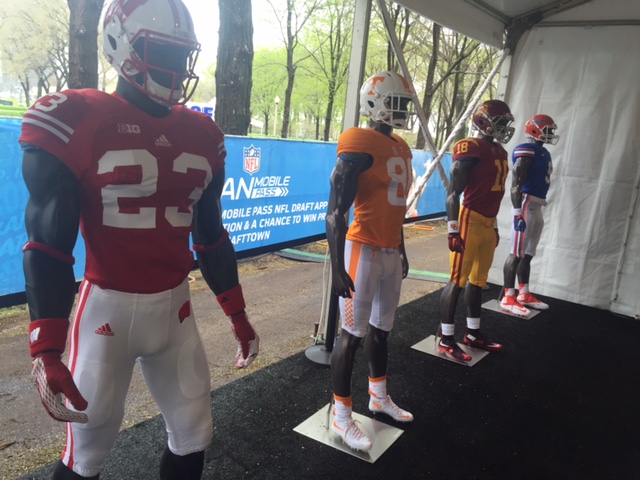 My next stop was the area next to Buckingham Fountain, where I watched the ESPN live broadcast. It’s important to note that the weather was awful, mid 40’s, and I noticed that two of the male anchors had blankets on their laps due to the weather. 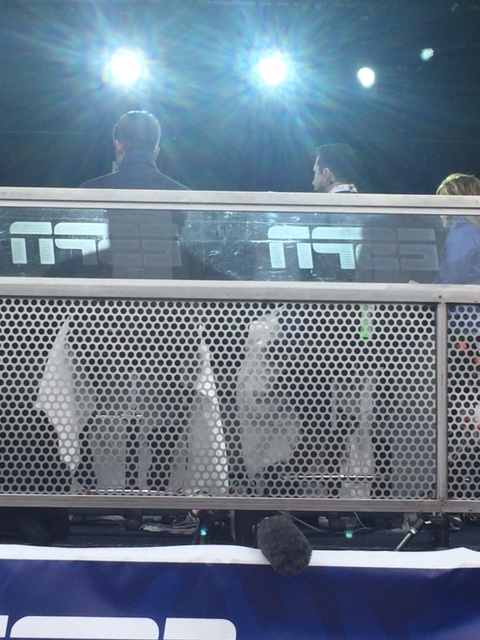 I then went to the NFL Store, and saw the mannequins representing the teams of the NFL in their home uniforms. Facing the back of the store, the AFC is on the left side, and the NFC is on the right side.

Again, I was wondering about the promotional items at Draft Town.  Anyone who knows me knows that I used to be a liaison between The DePaul University Ministry and ChariTees, and that I have been to a promotional products trade show as a result. So I was curious as to what kinds of products were being given away at the event. The event did not disappoint.

Koozies were a big giveaway, as I got 3 in total. I got two can koozies, one from the Pro Football and College Football Halls of Fame, and a jersey-shaped bottle koozie from NFL Sunday Ticket. 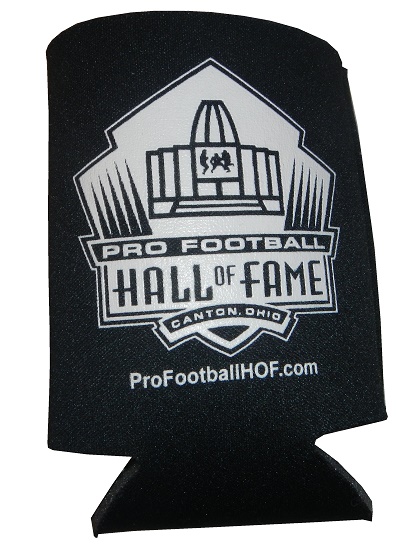 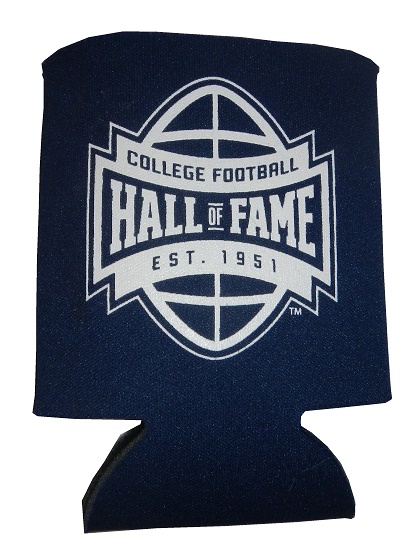 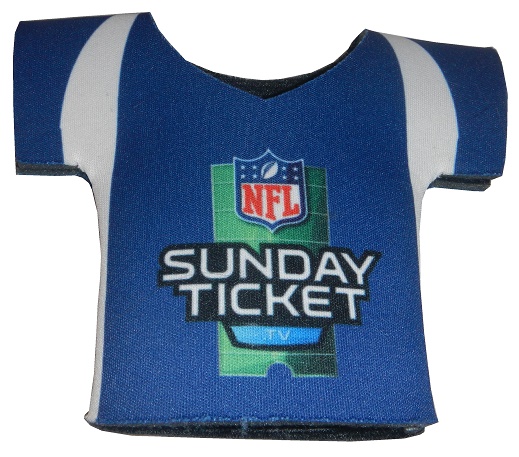 Keeping with the beer theme, Courtyard at Marriott gave out Seahawks green sunglasses with bottle openers attached. Despite being overcast, more and more people were wearing these as the day progressed. Why they went with this color I don’t know.

Hyundai went a bit more piratical and was giving away mini-flashlights. This was in addition to photographs that were used to make a custom video. As I’m not sure about copyright issues, I won’t post the photos or video.

When I got to Bridgestone’s tent, they had an interesting setup. They were giving away wrist-bands with the appropriate logos. I think they should have gone with black instead of gray to match the prodcuts. They also had a photo op where you could catch a pass, and get a towel, so I took advantage. I landed hard on my left leg, and as of Monday, it was still sore.

The NFL Auctions tent was giving away old Super Bowl programs, so I got a program from Super Bowl XXIV. I’m not sure why they were giving these away, but it was a cool thing to get. 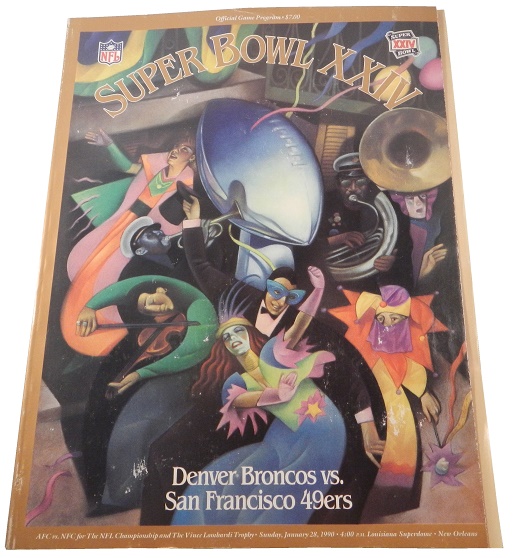 The most unique of the giveaways came from New Era. This was one of the more complex ideas for a give away I’ve seen. Before walking up to this machine, you take a selfie of yourself in a New Era hat, and post the image to Twitter and Instagram, with two custom hashtags.The machine then finds the pictures and hashtags, and if you do one of the two, it gives you a lanyard that doubles as a cap measurement.

If you post to both, it gives you a mini NFL Draft cap, half the size of a real cap. I got a Panthers version. 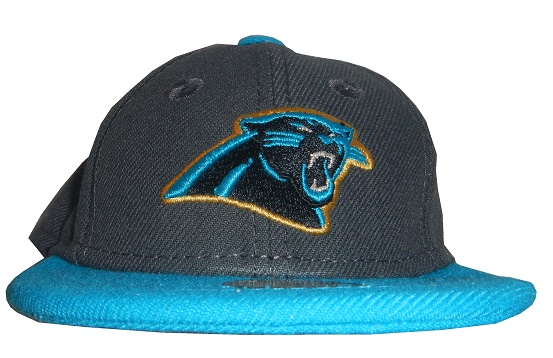 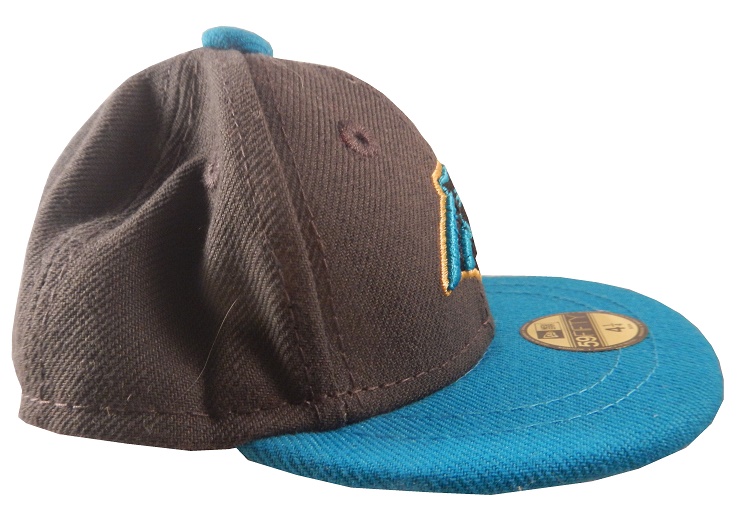 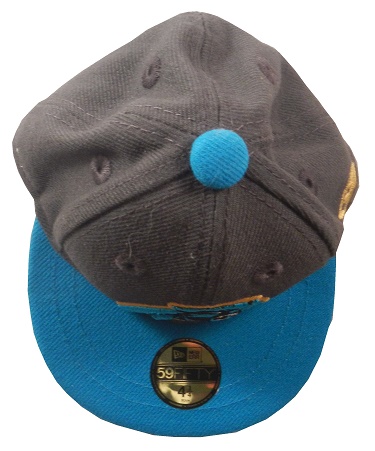 Once you checked in, and got through all of that, you were given…an NFL Draft 2016 towel. Slightly bigger than the Bridgestone towel. Even those of us, and there had to be over 400 of us, who didn’t get in got towels. I had hoped for a little more, but what can you do. 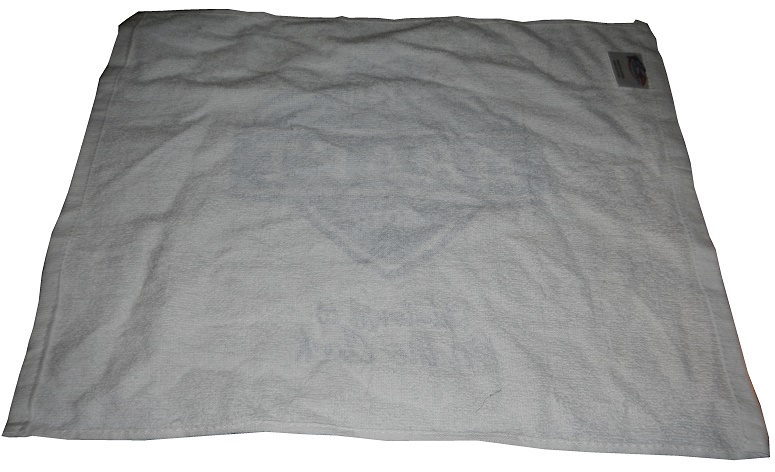 One thing I didn’t mention is that the NFL had it’s own app for Draft Town. It worked kind of like Swarm, where you check in at what booth you were at. The number of check ins earned you shots at prizes, and I wanted a football. As I was walking away from the auditorium, I got a text message that I had won the football. I went to the Wilson test, and got my mini-football.

It’s half the size of a regulation football, well made from a compsite material, and has all the teams printed on the side.

It was fun switching Nomex, steel and rubber for polyester, grass and leather, if only for a day, and I was disappointed that I didn’t get into the Draft itself, but I still had fun. Now I have to get back to what I do best, racing. Next week, I will pick up where I left off with The Vest Project.