I’m not a fashionista…and that’s putting it lightly. I wear my work uniform to work, and when I’m off duty, I wear t-shirts, and shorts, especially while lounging around the house. When I go out with friends and/or family, or when I go to races, I will wear pit crew shirts. I will pair these with baseball stirrups, shorts, and a baseball cap.

Pit crews are proud of what they do. They get to work on race cars for a living, which many fans would love to do. Sponsors are proud of their race teams, and want their crew members to represent the brand. As a result, teams and sponsors create pit crew shirts. These shirts are designed similar to the driver suits. Like driver suits, they are sold to collectors after the season. These aren’t as valuable as other race-used memorabilia, and while some collect them, others, like me wear them.

There are many kinds of materials that pit crew shirts are made of. Some of the older ones are made of polyester with heavy patches. Then there are newer shirts that are made of a light, breathable materials, with the logo sublimated on the material, like this 6Xl Dollar General Truck Series shirt.

The shirt shows some light wear, but is in great condition.

The shoulders have epaulets with DOLLAR GENERAL logos present. 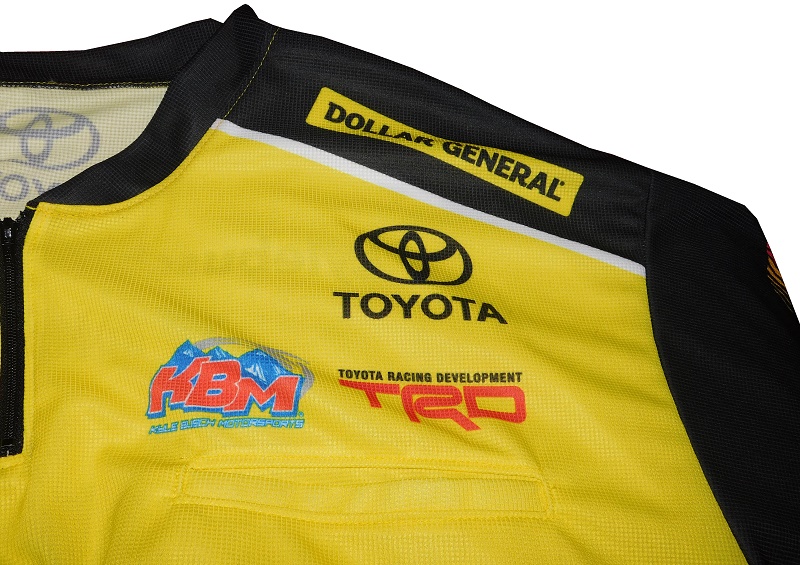 The sleeves have logos, the right sleeve has SUNOCO and SAFETY KLEEN, the left has NASCAR, TOYOTA RACING DEVELOPENT, TUNDRA, and SIRIUS XM logos. 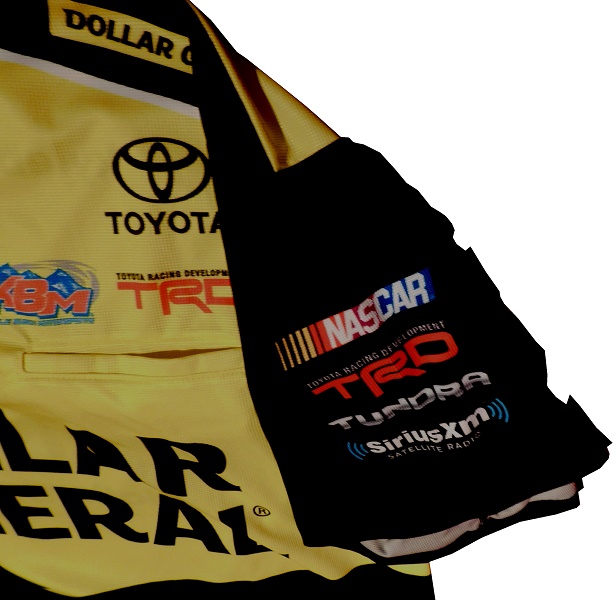 This is one of the newer shirts, and it has a jocktag. The shirt was made by ESM of Indianapolis. 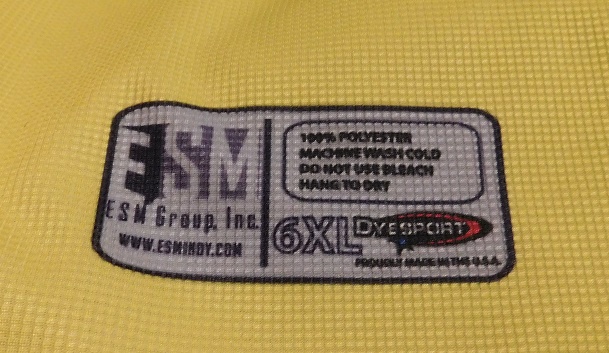 Sticking with the Camping World Truck Series, this 6Xl shirt was worn by the crew from Venturini Racing, when they were sponsored by ZloopIt in 2014. It has a combo of thin polyester, and breathable mesh. It is in great condition.

The shirt has blue epaulets on the black material, and the epaulets have ZloopIt logos. 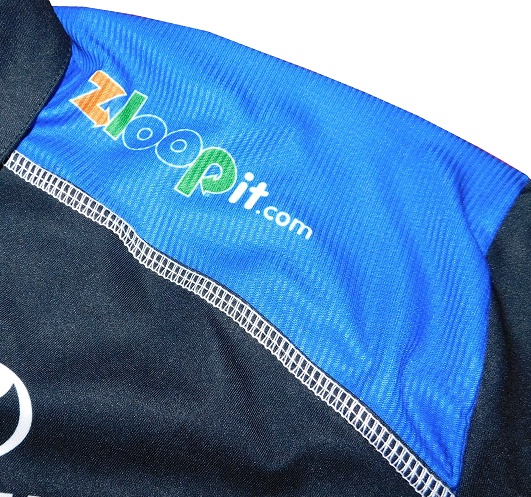 The sleeves have logos, the right sleeve has NASCAR, TOYOTA RACING DEVELOPENT, TUNDRA, and SIRIUS XM logos, and the left sleeve has a SUNOCO logo.

There is an Outer Circle tag in the cowl, indicating that the size is 6XL.

Moving on to the Xfinity Series, this is a Nike-made example from when PPI Racing was sponsored by Albertson’s. It is in great condition.

The shoulders have no adornment at all, the chest logos are all embroidered. 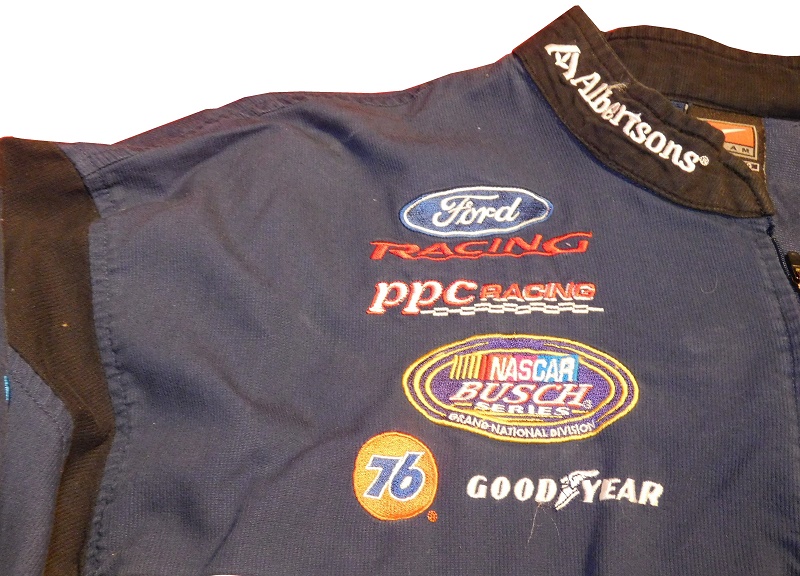 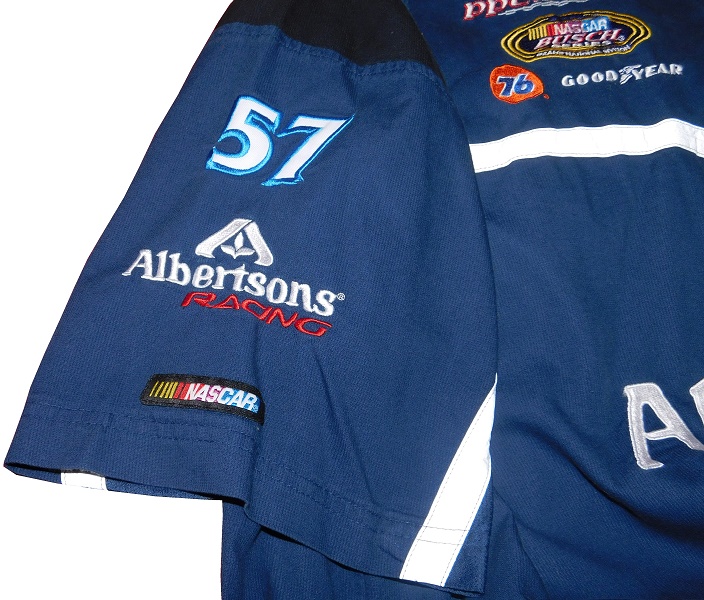 The cowl has a classic Nike 3Xl tag present.

This example, from when John Andretti raced for Braun Racing, with Camping World as a sponsor. The shirt is made from a slightly thicker polyester with sublimated logos. It’s in great condition. 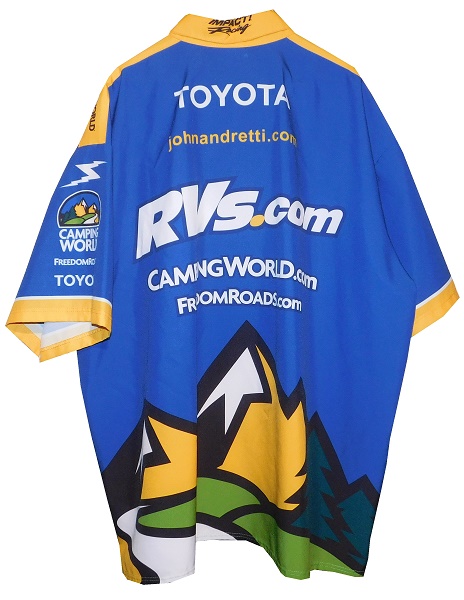 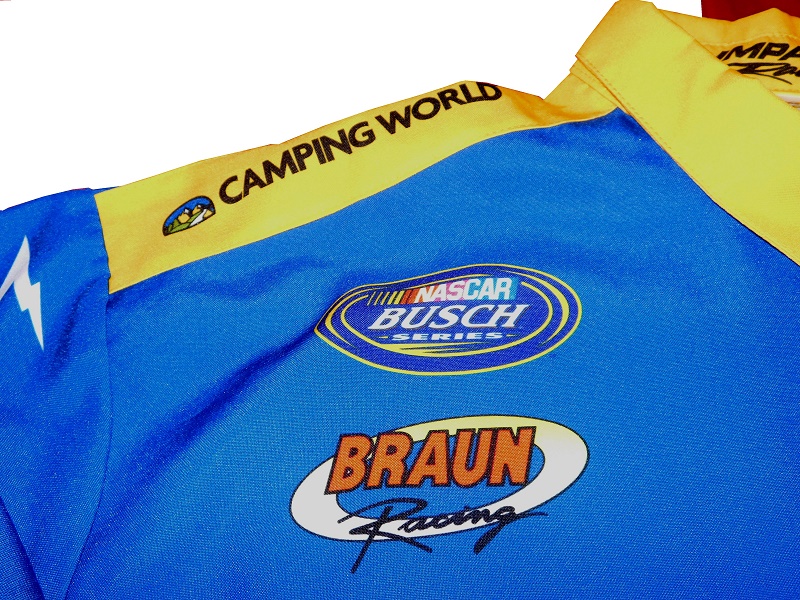 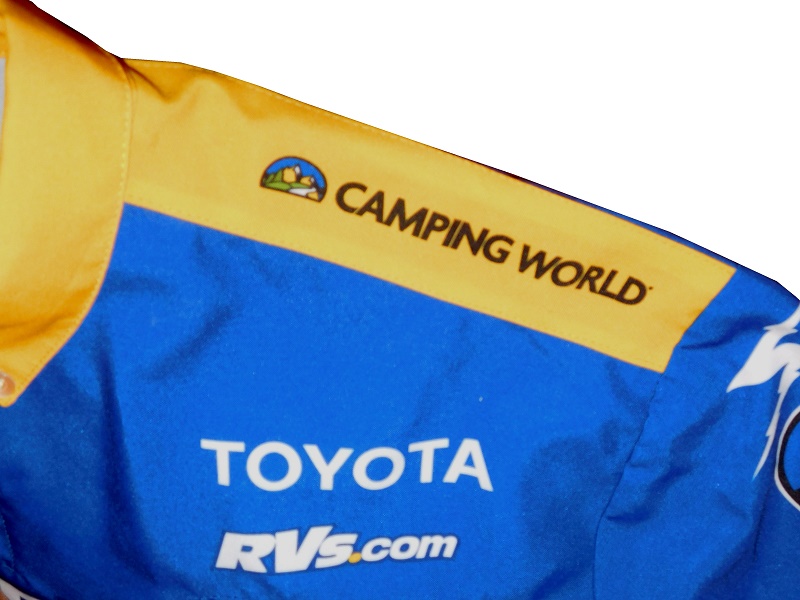 The sleeves have the same set of logos on each side. First is the Impact Z logo, then there is a CAMPING WORLD logo, followed by a FREEDOM ROADS, and a TOYOTA. 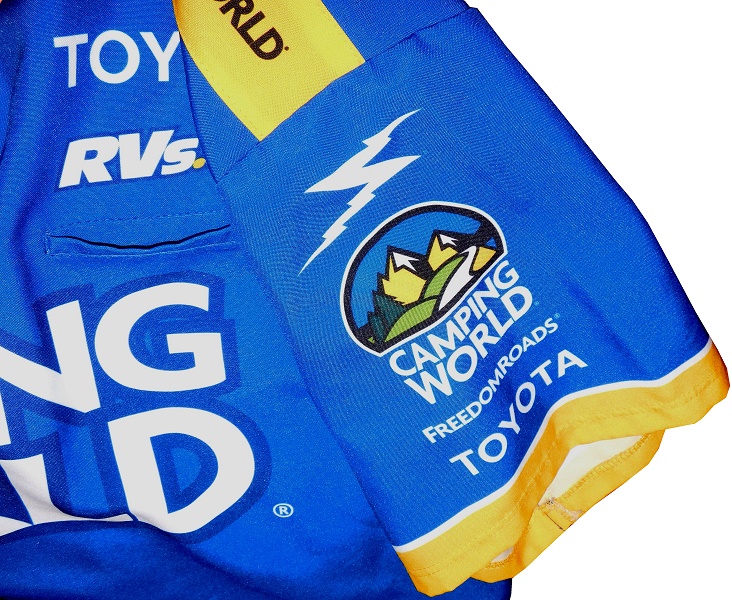 The cowl features an Impact crew tag, no size tag is present.

Sticking with Braun Racing in the Xfinity Series, this Berringer Wines pit crew shirt comes from that team as well. This is also a thicker polyester in great condition.

The shoulders have no epaulets, or adornment, and the logos are sublimated. 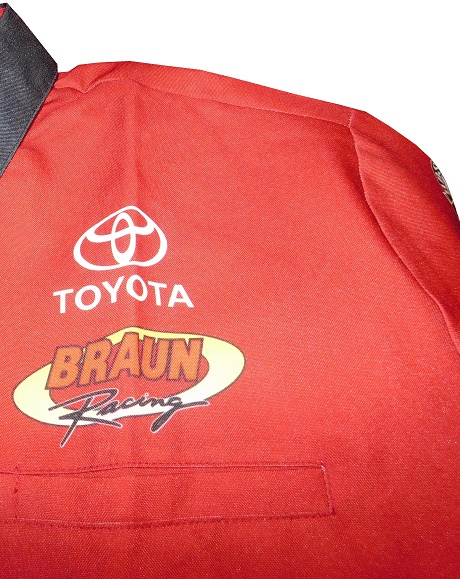 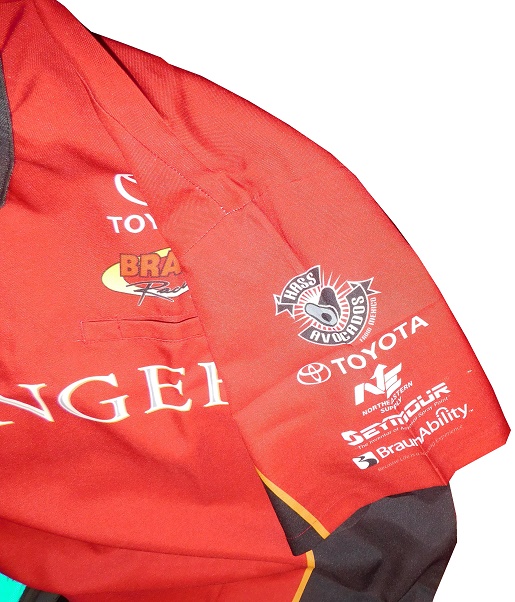 The shirt is made by Vicci, and there is a size 4XL tag in the cowl.

One of the best designs in pit crew shirts is Texaco Havoline, as exampled by this Juan Pablo Montoya shirt from his days with Chip Ganassi Racing. It is in great condition. 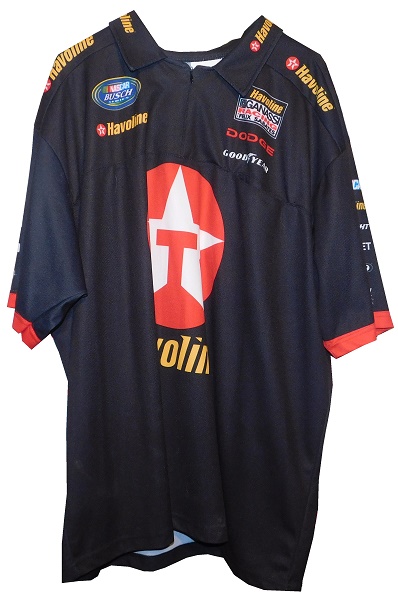 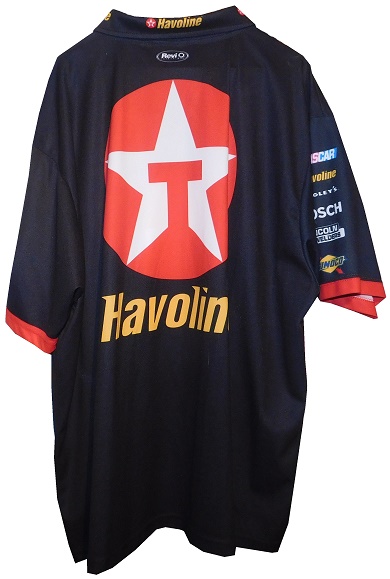 The shoulders have epaulets with HAVOLINE logos, and the chest has logos as well. 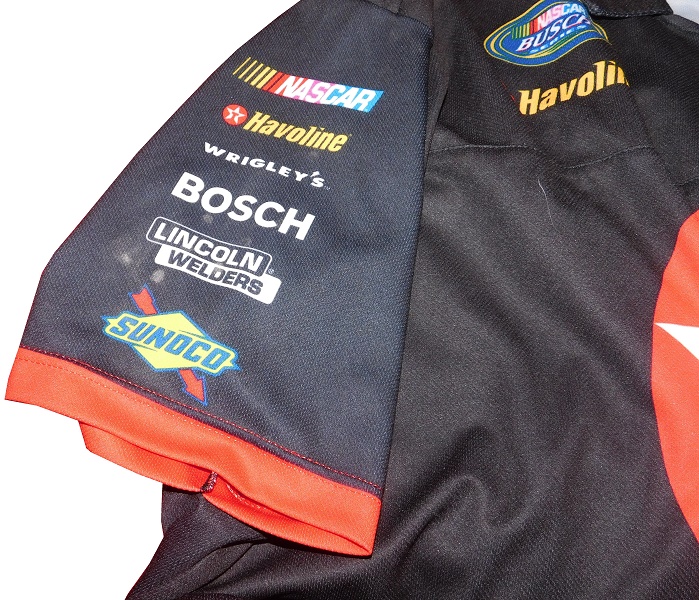 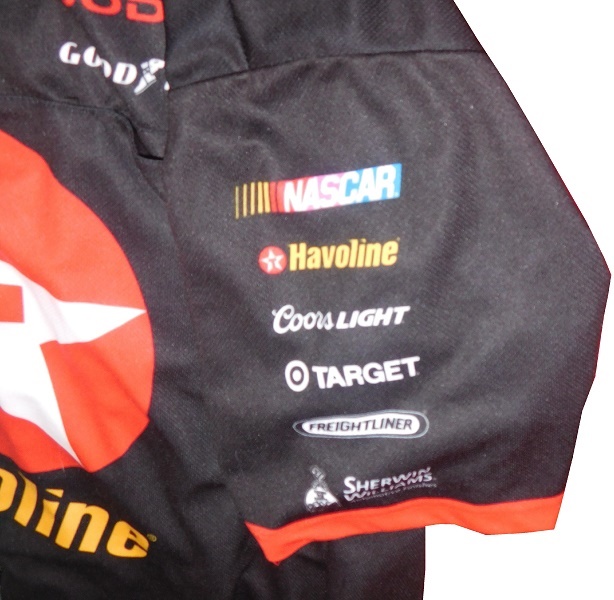 The cowl has a tag from Revi, but there is no size tag present. 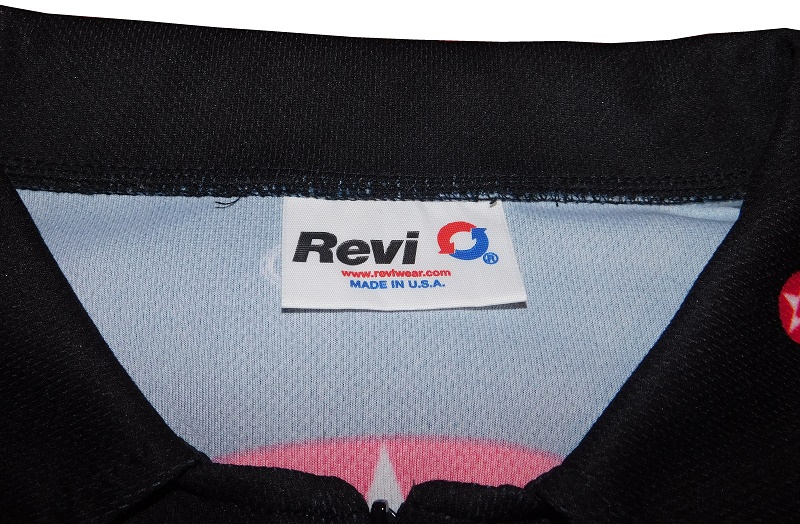 Ricky Stenhouse Jr. is a two-time Xfinity Series champion, and while with Roush-Fenway Racing, he was sponsored by CitiFinancial, and this pit crew shirt was prepared. It is in decent condition. 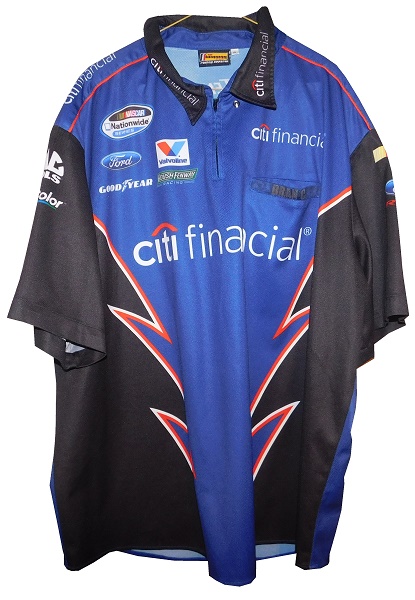 The shoulders have epaulets with CitiFinancial logos on them. 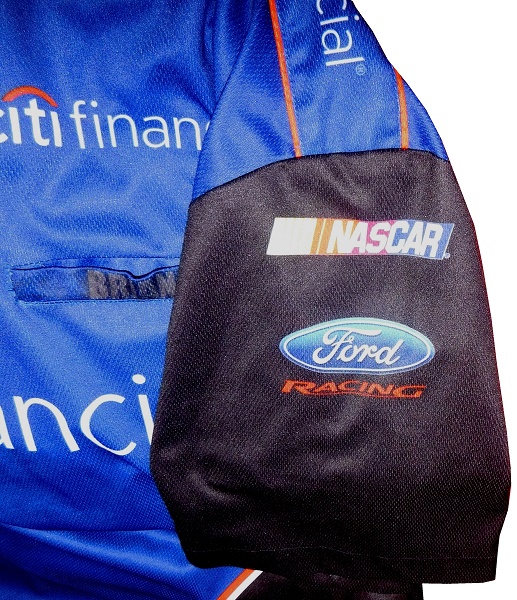 The shirt is made by The Winning Team, and a tag is present in the cowl. There is also a size 5Xl tag as well.

One of Greg Biffle’s sponsors in the Monster Energy NASCAR Cup Series was the National Guard. This shirt, made of dress shirt material, with heavy patches. 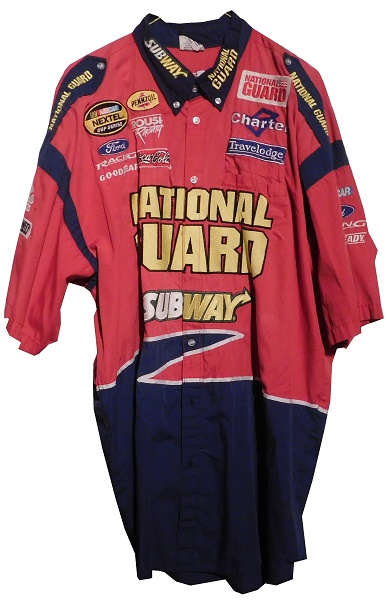 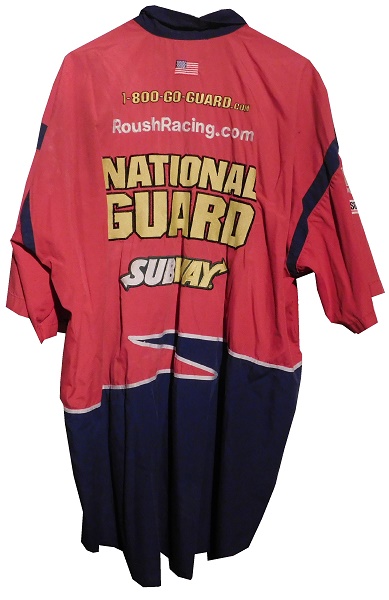 The shoulders have epaulets with NATIONAL GUARD logos embroidered into them.

The right sleeve has MAC TOOLS and JACKSON HEWITT logos, and the left sleeve has NASCAR, FORD RACING, and LABOR READY logos embroidered into it. 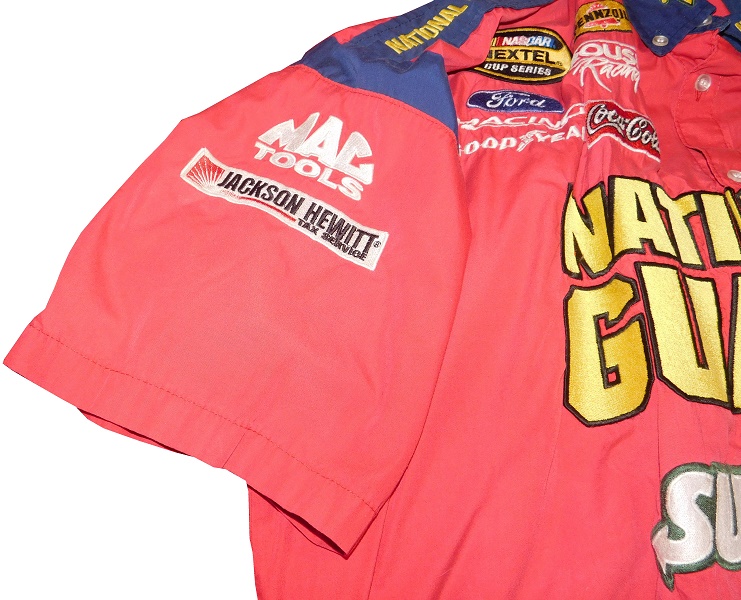 The cowl has a tag from Apex designs, and size XXXL tag. 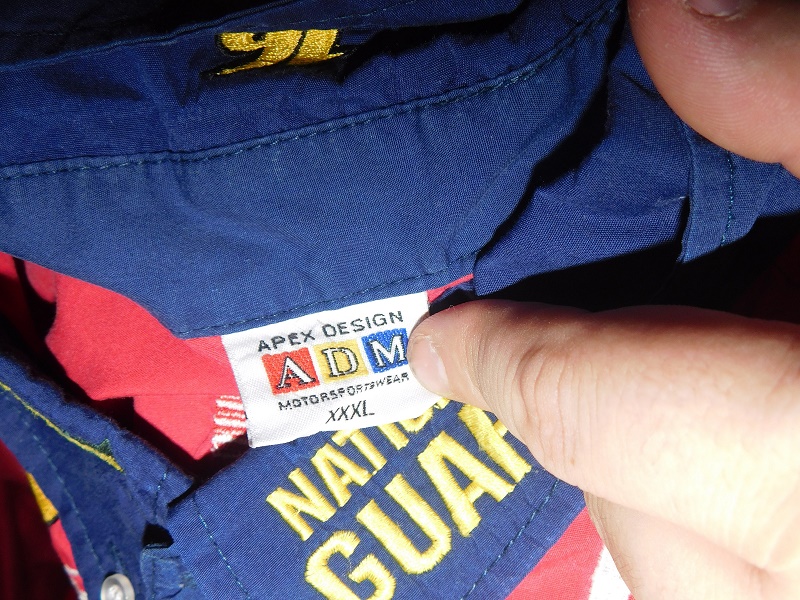 Front Row Motorsports has a few different sponsors, so, like many teams, they have team-branded pit crew shirts. This is one example, and it’s in great condition. 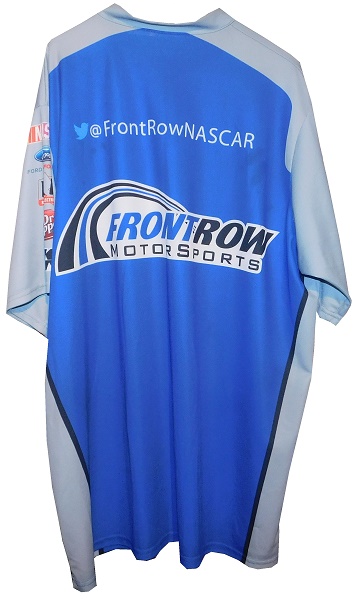 The shoulders have unadorned epaulets. 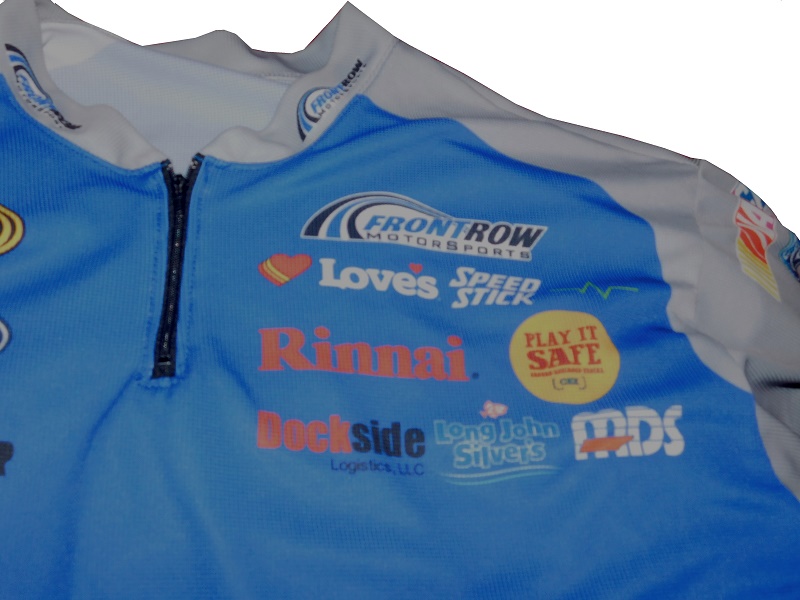 This is one of the newer shirts, and it has a size 3XL jocktag. The shirt was made by ESM of Indianapolis.

Bob Vandergriff is a former driver who turned into a team owner. For many years, he was sponsored by CJ Energy Services, This long-sleeve pit shirt was prepared for a crew member. The sleeves are a thin polyester, the rest of the shirt is a thicker material. 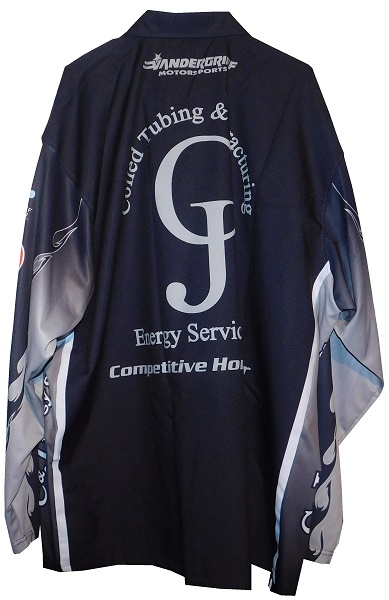 The shoulders are completely unadorned. 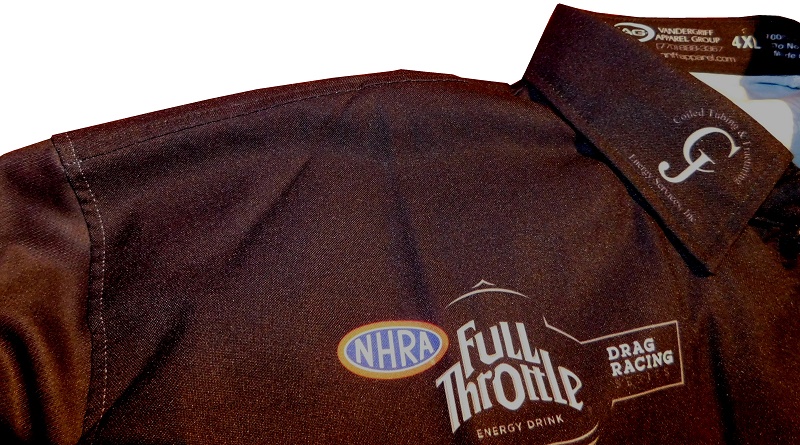 The sleeves have black on the outside, but gray flame materials on the undersides. The right sleeve has VANDERGRIFF APPAREL GROUP and SPLIT SECOND SPEEDSTERS logos

The left sleeve has THE VANDERGRIFF FOUNDATION, and HEDMAN HUSLER HEDDERS logos.

The Vandergriff Apparel tag is printed directly on to the back of the collar. It indicates the size as 4XL.

The fan appeal of pit crew shirts hasn’t been lost on teams, and there have been replica shirts made in the past. But for some seasons, replica crew shirts are made, but other seasons, they aren’t. Fans do like these, but for some reason, they are not as prevalent as replica driver suit jackets. I can only hope that these shirts do start getting made again.

Next week, we discuss the 50th Anniversary of the introductory of Nomex.