Founded by George Eastman in 1888, Kodak used a model of selling inexpensive cameras, but with somewhat pricey film. Once a mainstay in the photography business, after digital cameras overtook film cameras in recent years, Kodak was forced to turn elsewhere for their business. While the business went south in recent years, Kodak is working with other technologies to help salvage their business. The name Kodak came about because Eastman wanted a name that conformed to three principles: it had to be short; it couldn’t mispronounced; and it should not resemble anything or be associated with anything else except for his business.

One of my favorite sponsors of NASCAR during the 1990’s was Kodak. When we bought camera film, we would always by Kodak film. They had one of my favorite shades of yellow ever. It is a marigold yellow, as opposed to the bright yellows used by sponsor such as Kellogg’s. This shade of yellow gave the car a very bold look, without being over-designed. This sponsorship started in 1986 with the Bobby Eller Pontiac Grand Prix of Trevor Boys. This sponsorship switched to the #4 of Rick Wilson, where it stayed until the end of the 2003 season. Kodak then sponsored the #77 of Penske-Jasper Racing until the end of the 2005 season, when they left the sport.

After the September 11 attacks, the nation exploded in a patriotic fervor not seen in years. NASCAR was one of the sports that fought on to send the message that we are not afraid. During the 2001 season, the team had four drivers, Rich Bickle, Robby Gordon, Bobby Hamilton, and Kevin LePage. The team struggled that season, failing to even score a top 10. During the 2001 season, a crew member wore this single-layer two-piece Simpson suit.

The suit shows decent use, with scuff marks and some stains as well.

The black collars have yellow KODAK logos embroidered into them.

The cowl has a SIMPSON warranty tag present.

The right chest has a NASCAR WINSTON CUP SERIES logo, and a KODAK logo embroidered into it, and a SIMPSON patch sewn into it.

The left chest features an American flag patch, a Chevy bowtie logo, a MORGAN MCCLURE RACING, and a FORWARD AIR logo embroidered into it. 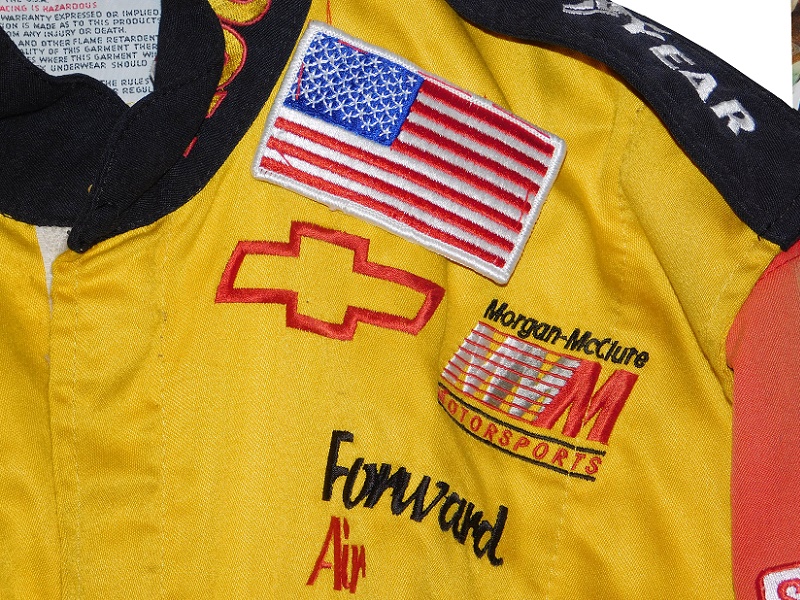 The front torso features a large KODAX MAX FILM logo, as well as a small CD2 logo embroidered into it.

The black shoulder epaulets have white GOODYEAR logos embroidered into them. 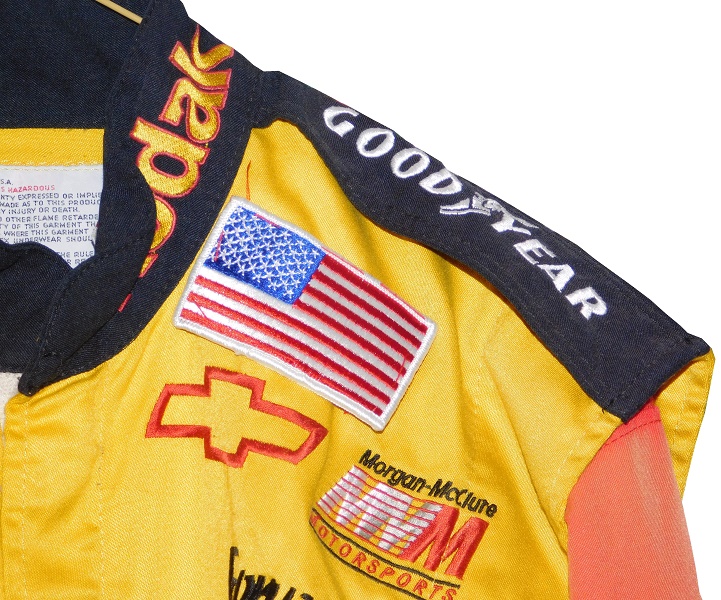 The right sleeve has KODAK MAX FILM, SAFETY KLEEN, MOOG, and UNOCAL 76 logos embroidered into them, no logos in television position are present. 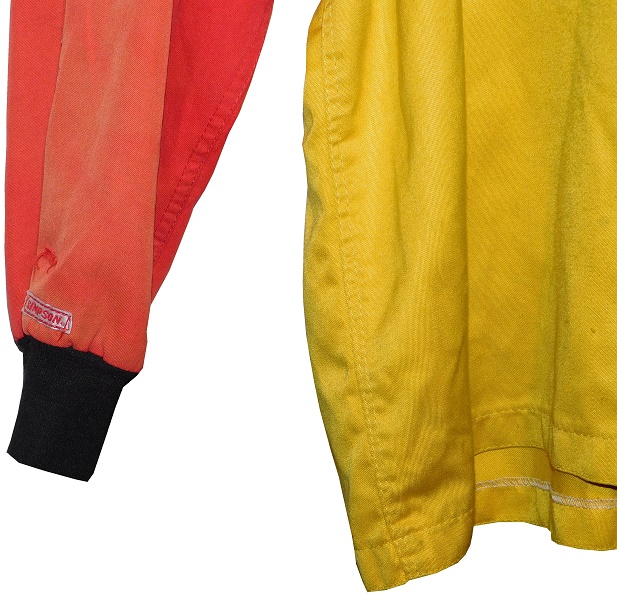 The left sleeve has SIMPSON, NASCAR, KODAK MAX FILM, MAC TOOLS, and BOSCH logos embroidered into it. No television logos are present on this sleeve either.

The back of the suit shows some stains just above the hem.

The back of the neck has a Chevy Bowtie logo, and the name BENDER embroidered into the yellow material below the neck.

The back torso features a large KODAK MAX FILM logo embroidered into it.

There are some dirt stains on the back, just above the hem. 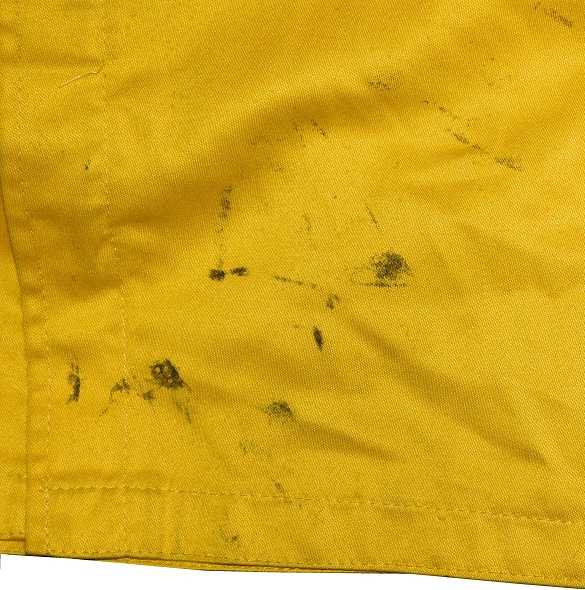 Contrasting with the jacket, the pants are black with yellow lettering, and show light use.

The back of the pants have a SIMPSON warranty tag present, and it shows a lot of wear.

The right leg has a KODAX MAX FILM logo in television position, and the cuff shows light wear.

The left leg has a KODAX MAX FILM logo in television position, and the cuff shows light wear.

The back of the pants show very light wear.

In addition to this firesuit, I also have some sheet metal, namely a door number and contingency panel circa 1998,

and a small piece from Ryan Newman’s #12 Kodak Dodge.

I also have a 1/24 die cast from Sterling Marlin’s Kodak days.

Though we take it for granted, single-layer suits for pit crew members were, for many years, the rule. Even though the risks on pit road had proven themselves, teams did not feel the need to emphasize multi-layer suits for their crew. In this day in age, the pit crew as as protected as they can possibly be. Now, the teams who work on the cars wear the exact same uniforms that the driver wear, in terms of safety. Suits like this are an example of how teams would conform to uniform rules as inexpensively as possible.

Next week, I will examine a pit crew suit that conforms to modern standards.