I don’t know where my fixation on lottery memorabilia came from I don’t know why I find this stuff interesting. I guess it had to do with the way I grew up. Up until my grandfather came to live with us at age 10, we only had free television. In the Chicago suburbs, that meant we had WBBM Channel 2, WMAQ Channel 5, WLS Channel 7, WGN Channel 9, WTTW Channel 11, and WFLD Fox 32. There were others, if you were lucky with your rabbit ears, but those were the ones we got. As such, we would watch the news on WGN, which was what my family liked.

A part of those newscasts were the Lottery drawings, which fascinated me, but I can never remember our family playing the lottery. Again, it goes back to what I said during my first Lottery column, when I said that “Human beings all have hope, but human beings need something to hope for, and something to inspire hope. For many, religion is that outlet. For others, it is their sports teams. For many, the hope that they could win millions in the lottery is that beacon of hope.”

The history of the lottery in the United States dates back to the 1600’s, while Europe was colonizing North America. Many colonies saw gambling as harmless fun, but as English investors waned to profit from the New World, this changed quickly. As time went on, each of the 13 original colonies had a lottery system in place to help fund the colonies. It became a civic duty to play the lottery. Recessions, scandals, and corruption had almost eliminated the lottery in the United States by 1868.

In 1934, Puerto Rico, then a US colony, started a legal lottery. It would take 30 years, but in 1964, New Hampshire started a lottery. Since then, 44 of 50 states, as well as Puerto Rico, Washington DC, and the US Virgin Islands have lotteries. Alabama, Mississippi, and Utah don’t have lotteries due to religious objections. Nevada has the gambling industry, and they don’t want competition, and Alaska and Hawaii, not being mainland states, aren’t worried about losing tickets out of state.

The lottery takes several forms. Scratch off tickets, first introduced in the 1970’s, are a very popular method of playing the lottery. There are many different kinds of games, with different rules. Pick 3, pick 4, main drawing, and Powerball have their origin in “numbers games.” Numbers games were popular in poorer areas of the country, especially urban areas. The game works by drawing balls that had numbers to pick the winner. A similar game was popular in South Florida and Cuba called “Bolita” or “little ball” was where betters would bet on which number would be pulled out of a bag containing 100 numbered balls.

All the pre 1934 lotteries had one major drawback that kept them from being as accepted as it is today. They were easily rigged, and people lost money on the racketeering that took place around them. Today, the equipment, the drawing, the tickets, and every other aspect is heavily supervised and regulated so that this kind of cheating is not possible. The level of security for a drawing is high, due to the amount of money involved.

One thing that I learned about lottery security is that most of the people directly involved don’t know what equipment is going to be used. 90 minutes before the drawing, the equipment is determined, tested, the host rehearsed, and by the time that is all done, the broadcast is almost ready to start. Though security is high, and equipment is tested, there is always the case that something can go wrong. Do a quick search for “lottery blooper” on YouTube, and you get several examples, including this one:

Security is also high because the amount of money can entice people to cheat, even those inside the system. The chance for cheating can’t be avoided either, as the Pennsylvania Lottery discovered on April 24, 1980, when the winning number for the Daily Number was 666, which tipped off the lottery officials that something was off. It turned out that Nick Perry, the announcer for the lottery drawing, and a group of people replaced the standard lottery balls with latex paint. Of the 10 lottery balls, 8 were replaced with these new balls, so there would reduce the number of possible combinations to eight: 444, 446, 464, 466, 644, 646, 664, and 666. The 666 combination seemed odd, so an investigation was conducted, the guilty parties were caught, and to this day, the number 666 in the Pennsylvania Lottery is referred to as a “Nick Perry.”

To say that Florida has a major connection to NASCAR is a masterpiece of understatement. NASCAR itself was founded at The Streamline Hotel in Daytona Beach, and the Cup Series’ second race was held at The Daytona Beach and Road Course. NASCAR’s most important race, the Daytona 500, takes place every February.

The Florida Lottery was started on January 12, 1988 by order of a constitutional amendment approved by Florida voters by a 2-to-1 margin in the general election of November 4, 1986. It was meant to generate income for schools. As the popularity of the lottery increased, the Florida Lottery began sponsoring southern-based races for individual race teams, including James Buescher in The Xfinity Series in July, 2013. One of the crew members wore this Impact vest. The vest shows light use.

The orange collar is a standard collar, and is unadorned. 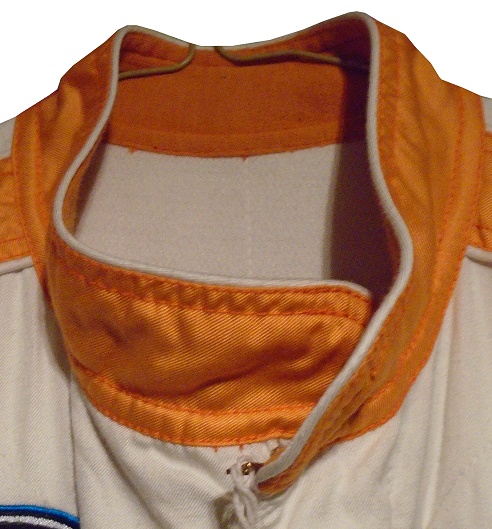 There is no tag present in the cowl.

The right chest features a NASCAR NATIONWIDE SERIES logo, and a GOODYEAR logo embroidered into it.

The front torso features a FLORIDA LOTTERY logo embroidered into the white material.

Inside the front zipper is the Impact warranty label and identification tag, which has 7-3-2013 written in Sharpie on the tag. 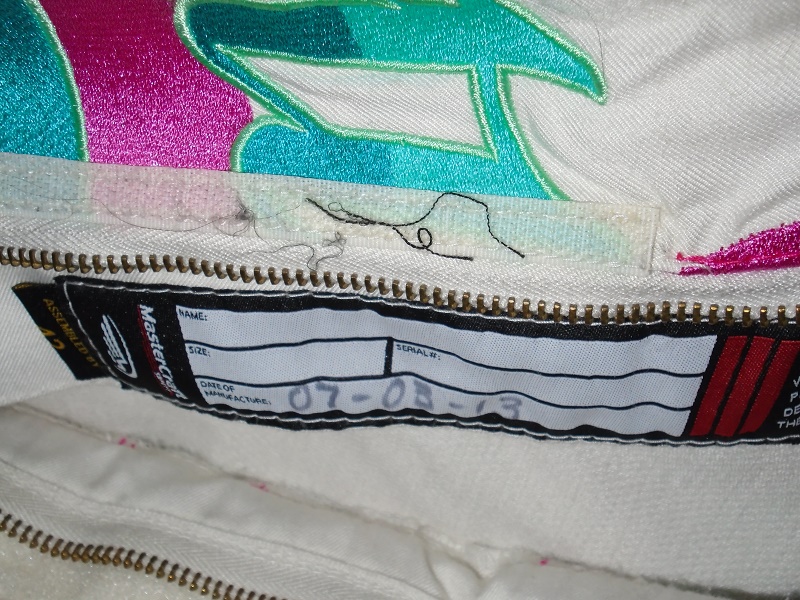 The hems have Velcro comfort straps on the sides, under the arm holes. 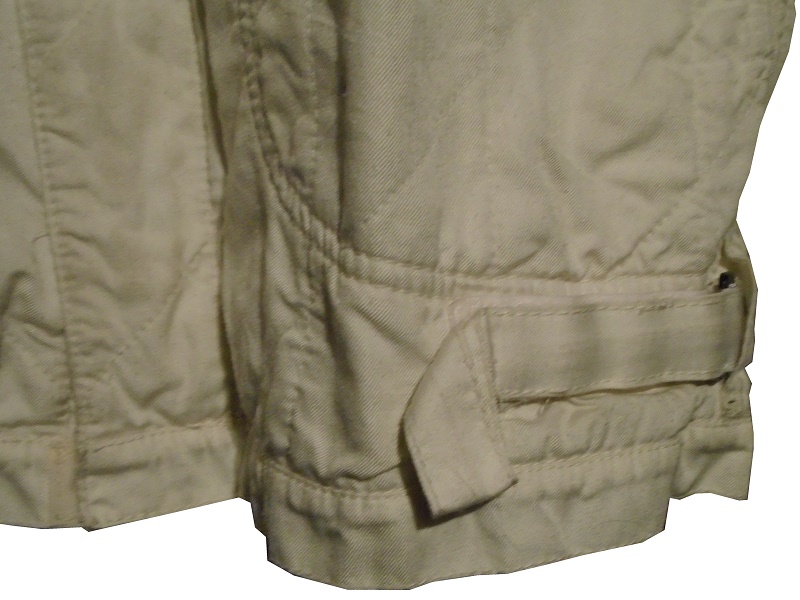 The orange shoulder epaulets are unadorned, and the vest has standard arm holes. 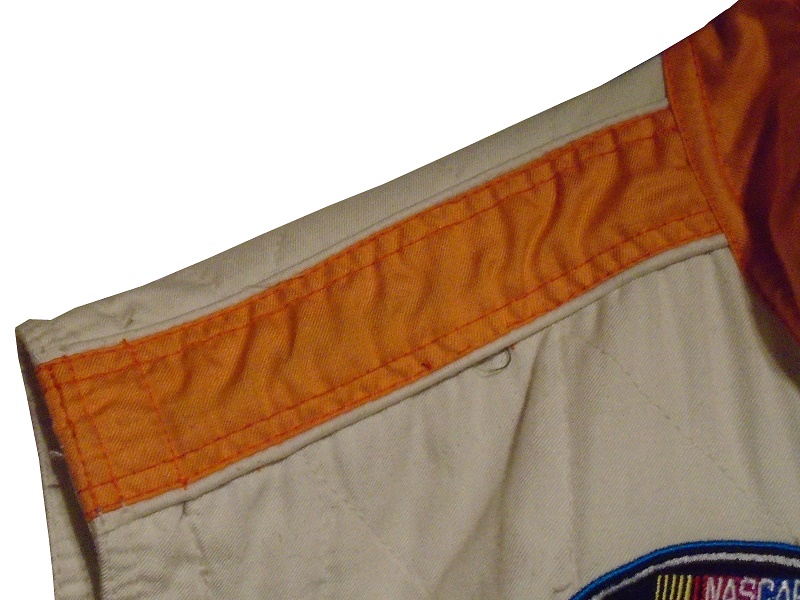 The back of the vest doesn’t have much wear to speak of.

The back of the neck has an Impact Racing logo.

The back torso features a FLORIDA LOTTERY logo, with JUST IMAGINE underneath.

Next Week the last vest project…for a while.