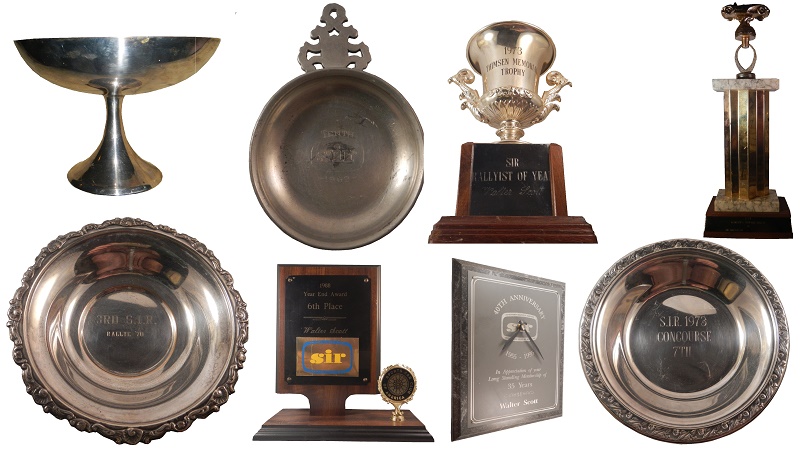 For this week, we will focus on collecting trophies. Drivers race for two things, the love of the sport, and to win. Climbing out of the car in victory lane feels good, and being presented a trophy for winning feels even better. Interestingly, trophies and awards from NASCAR and other racing series are frequently finding their way into private collections, such as mine. It might seem odd that trophies make their way into private collections, but there are a myriad of reasons for this.

One reason for this is that after their racing career ends, drivers will sometimes need to make some money, and will sell them. Other times, they are sold to raise money for charity. Sometimes it is because they need more space. After a driver passes away, the family will sell off the trophies, because they don’t have the same meaning to the rest of the family. In any event, these artifacts are unique items to collect, and are as unique as the drivers who won them.

Drivers have been awarded everything from surfboards, wine bottles, and guitars, to grandfather clocks, and gas pumps. The grandfather clock is given out to winners at Martinsville was started in 1964. The story goes that track founder Henry Clay Earles was talking with Curtis Turner, and in the course of conversation, Turner mentioned he did not have the room for trophies, and had to give some away, so he decided to award a trophy with a legitimate function, and as luck would have it, Ridgeway Clocks had a factory 3 miles away from the track. Earles gave the first grandfather clock to Fred Lorenzen when he won the 1964 Old Dominion 500, and the rest is history.

Interestingly, giving trophies that had everyday functions is a lot more common than most people realize. This example is a silver footed tray.  It was awarded to the winner of the Oilzum Motor Oil Trophy Race at Onteora Speedway in Olive New York.  The name of the winner, and when the race was run has been lost to history.  It is 21 inches long, and 17.5 inches wide. It looks as though it could have been used for a tea service or as a serving tray for food at a party. 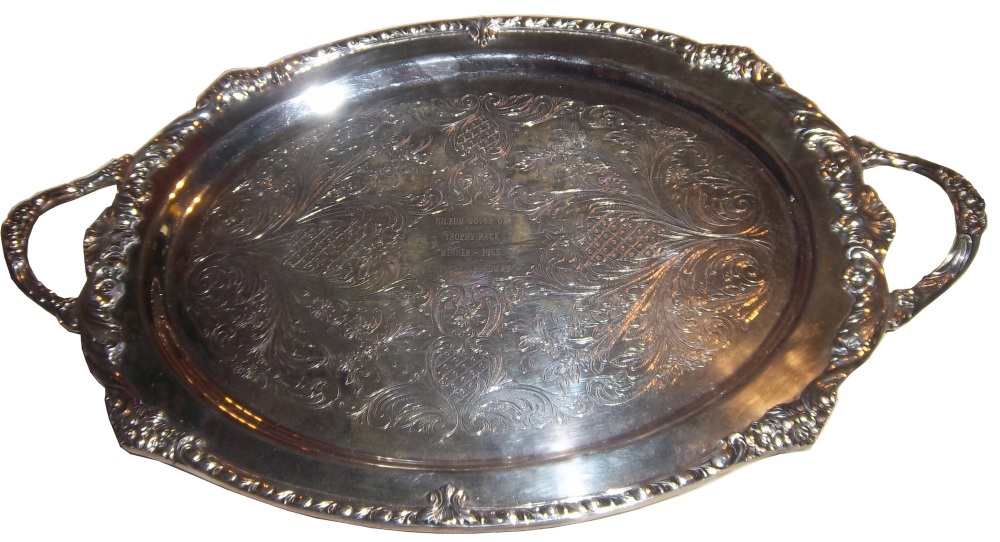 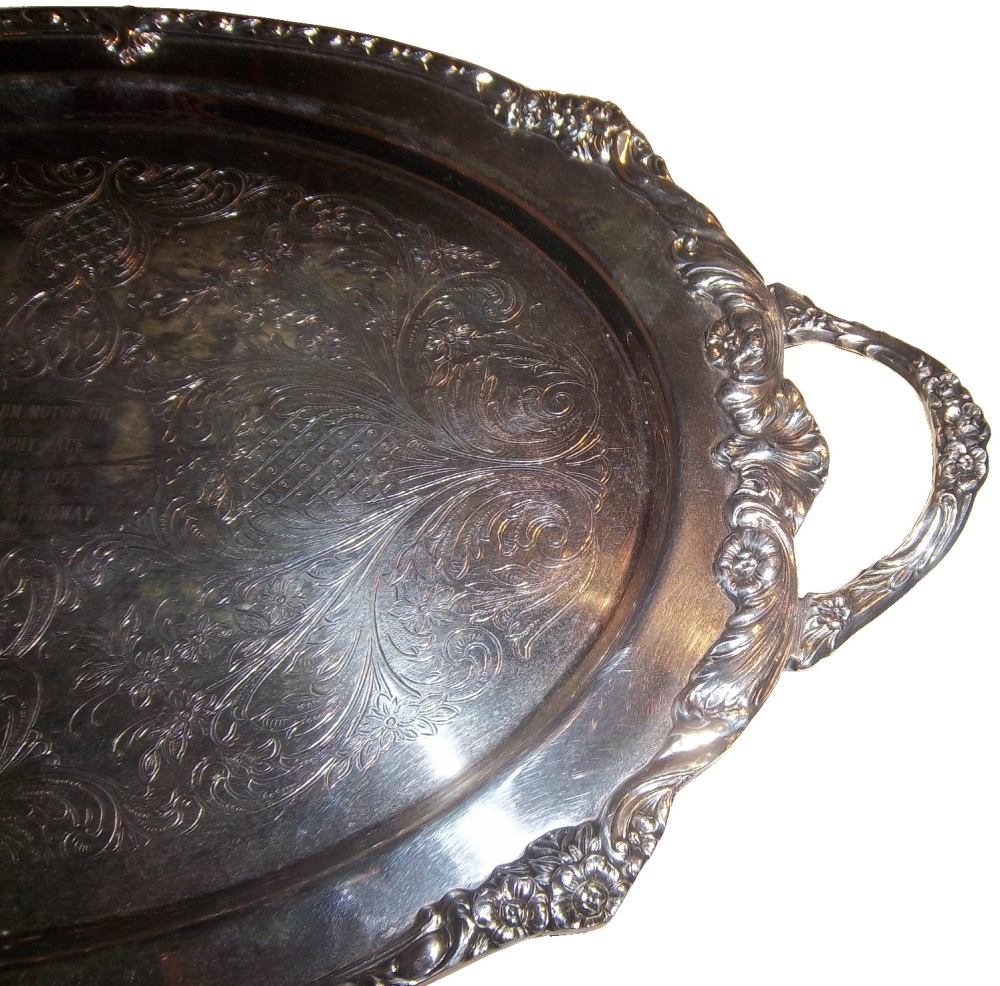 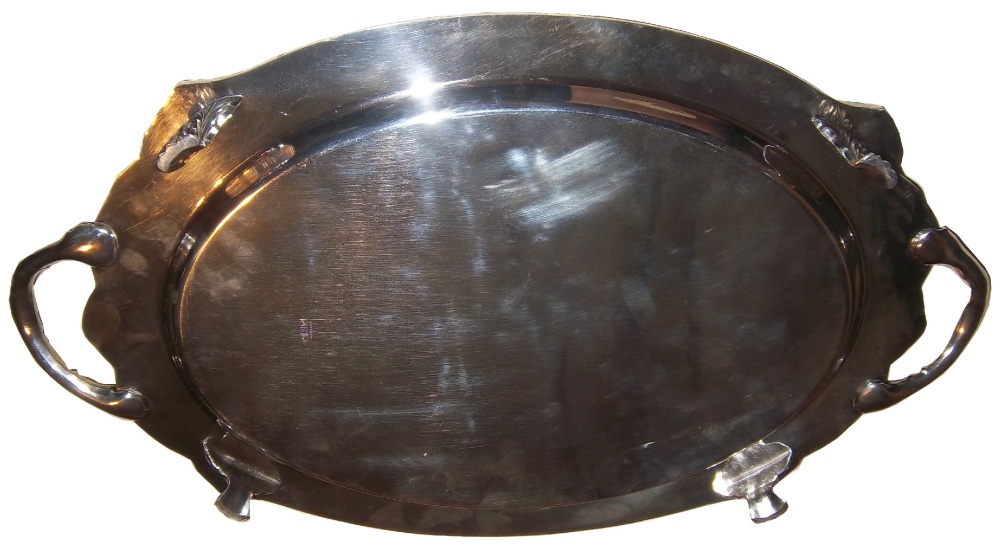 It has some scratches across the front, but for a trophy as old as it is, it is still in very good condition.

Award and function combine again in this 4 inch tall silver mug given to the winner of something called the SCCA Rallye on December 1, 1957. It has not fared as well as the tray, showing rust spots and discoloration. 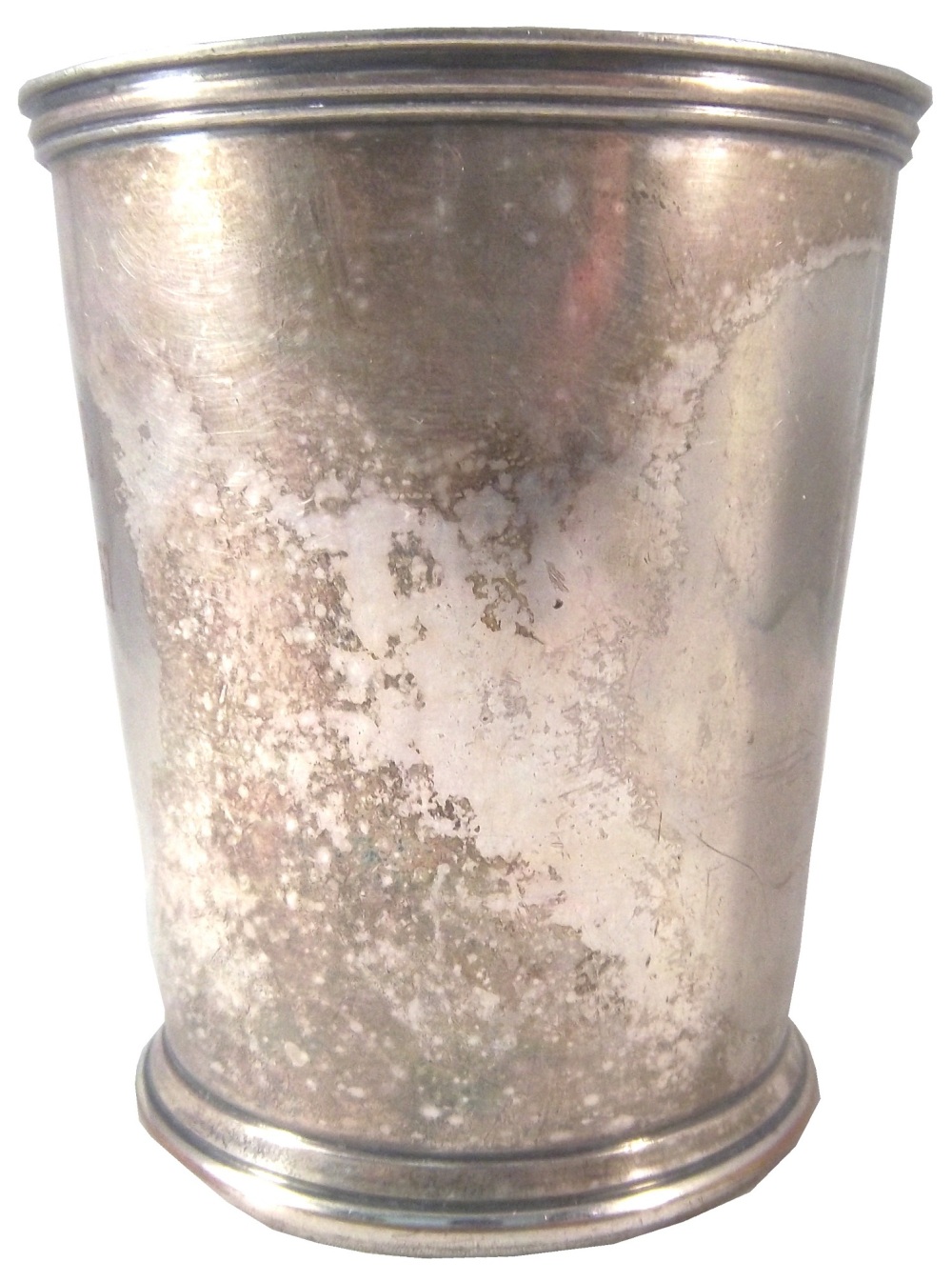 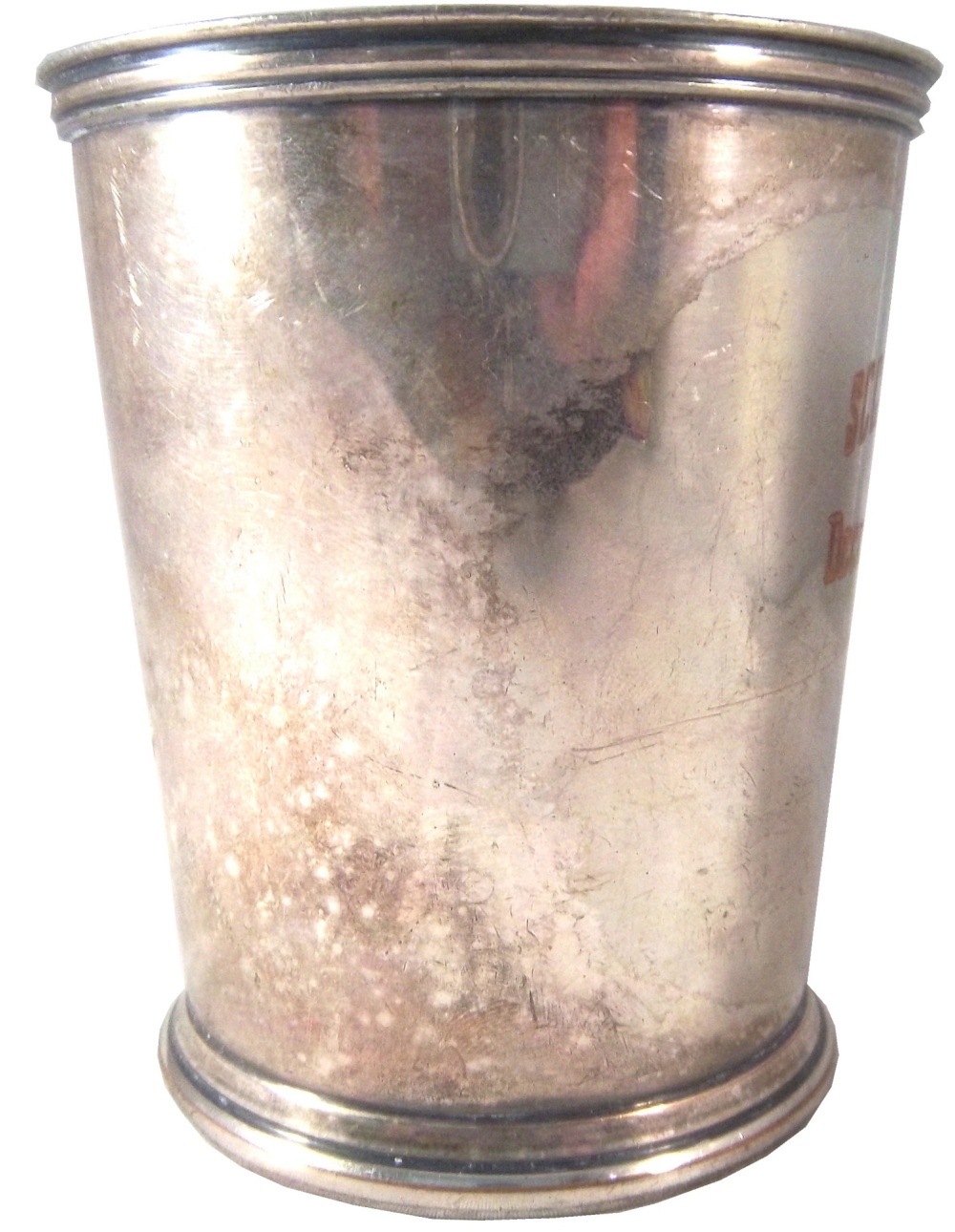 Like many national racing sanctioning bodies, The Sports Car Club Of America or SCCA has several regions that have their own racing. Other sanctioning bodies that have regions are NASCAR, and the NHRA, to name a few. While some drivers go on to national success, many drivers come to be great in one specific region.

The Southern Indiana is one of 115 regions, which are divided in to nine divisions. One such region is the Southern Indiana Region, which holds events in Southern Illinois, Indiana, and Kentucky. One driver who raced in a number of events was a driver named Walter Scott. Racing from at least 1960 to 1995, Scott won a number of different awards and trophies, which survive in my collection, including this small bowl. The bowl is for a 10th place finish for an unnamed event or series in 1960, and is in great condition. 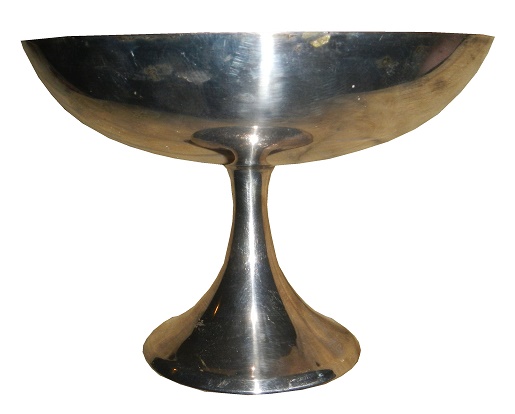 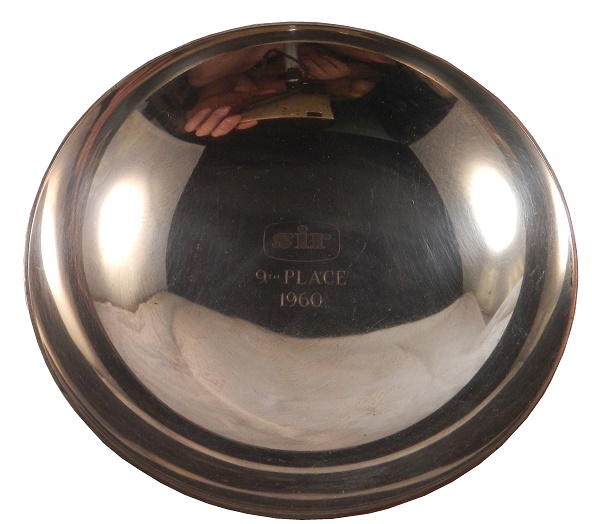 For another unnamed event or series in 1962 , Scott finished 10th. He was awarded this small bowl as a result.

Walter Scott was a navigator for a driver in something called the “Thimsen’s Terrible Rallye” in 1965. The duo finished 2nd. This trophy was awarded to him for that 2nd place finish.

For a third place finish in an unnamed Rallye in 1970, Scott was awarded this small bowl. It has some scratches.

1973 had Walter Scott perform well, and winning this small Thimsen Memorial Trophy for Rallyist Of the Year, which has some small scratches and dings. 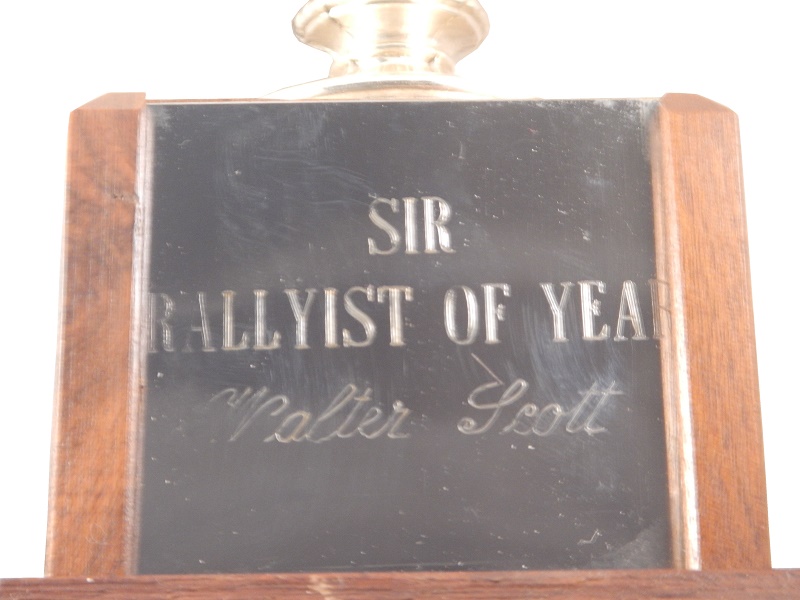 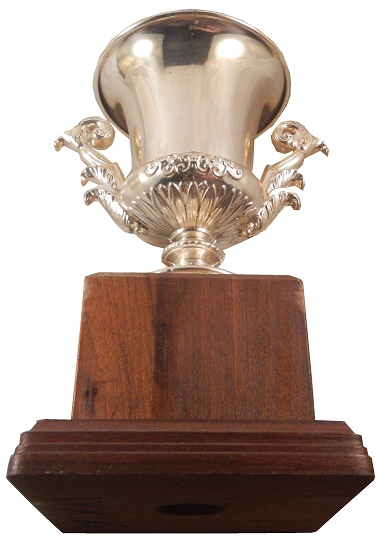 That same year, Scott won a small bowl for finishing 7th in something called the SIR Concourse, which shows some scratches. 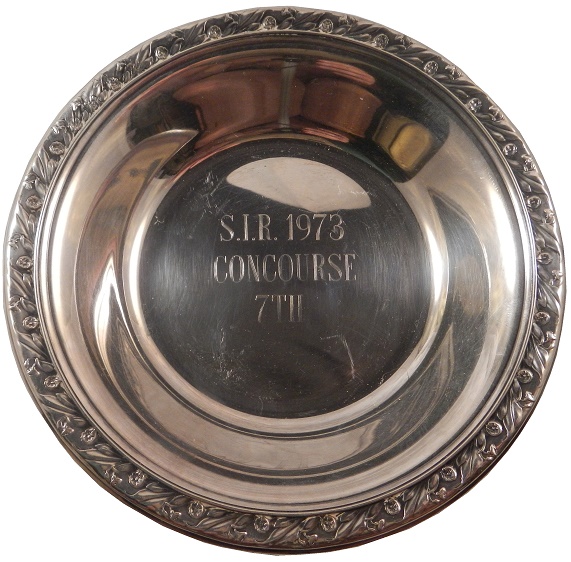 Walter Scott was still going in 1988, where he won this large trophy for the 1988 Year End Award for finishing 6th place. It doesn’t show any damage.

In 1995, the Southern Indiana Region celebrated 40 years. Walter Scott had been a member for 35 years, and was awarded this plaque clock to commemorate his long time with the SIR. 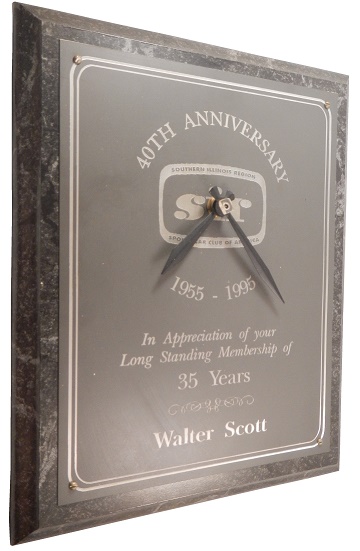 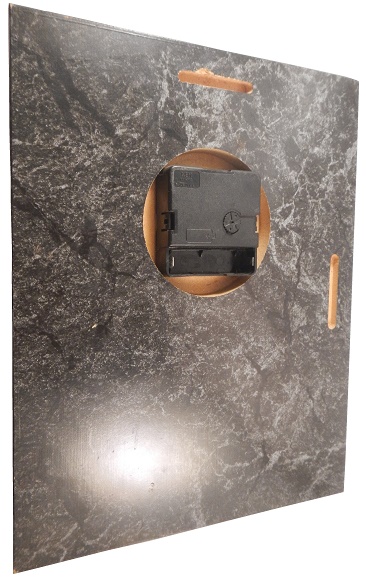 In 1996, Walter Scott competed in a Rallye called the “Tulips and Other Spring Flowers,” where he finished first in his class. He was awarded this small plaque as a result. It is in great condition. 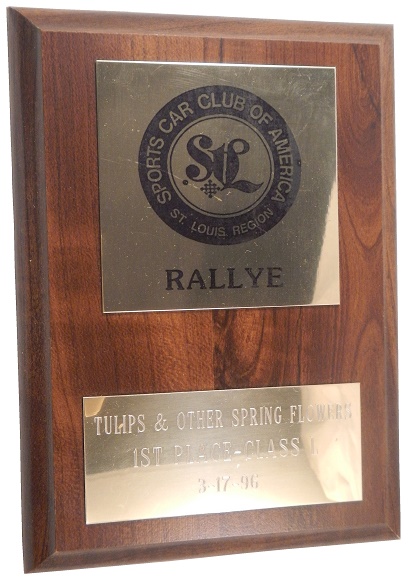 The checkered flag is synonymous with racing. While no one is really sure when the checkered flag was first used, photographic evidence dates it to at least 1906. The origin of the design is also lost to history as well. Since it is so iconic, the checkered flag is used as a trophy in many forms of racing. This example is from the Doylestown Quarter Midget Race Club which is based in Honeybrook Pennsylvania. It is 24 inches square and has the wooden pole still attached. A patch on the front states that this was awarded to the “FEATURE WINNER, DQMRA.” 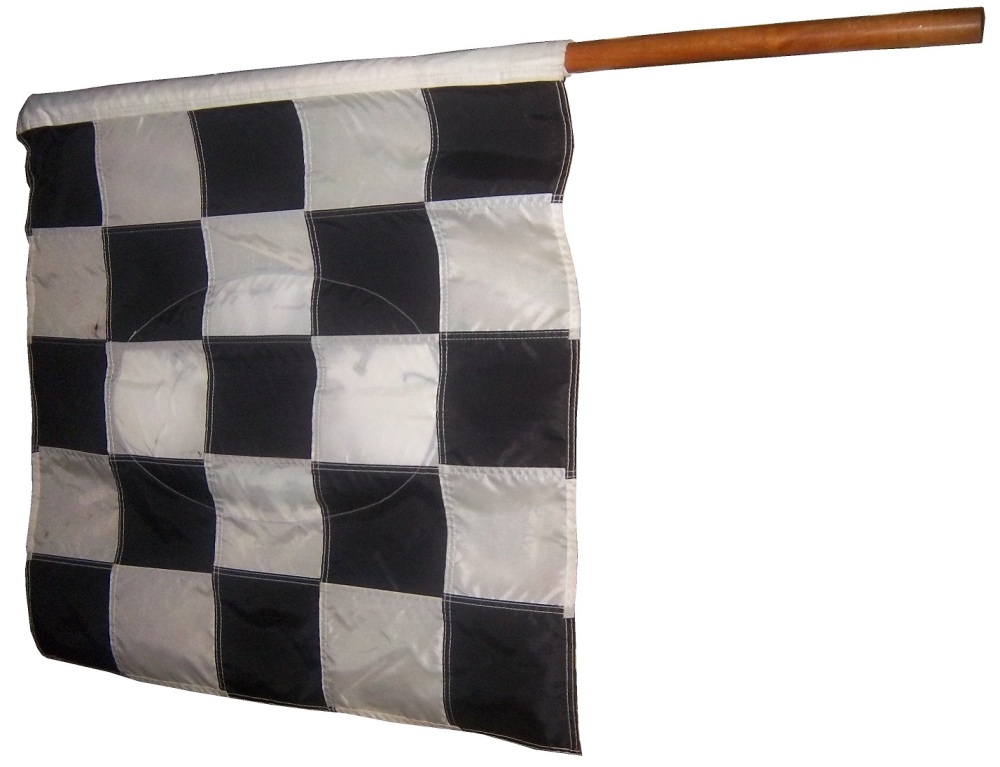 The awarding of small trophies was and is very popular, and this is an example. It is a 6.25 inch tall chalice awarded to The Best Beginner of the 1966 Rusters Run. It shows some staining from age, but it is in great condition 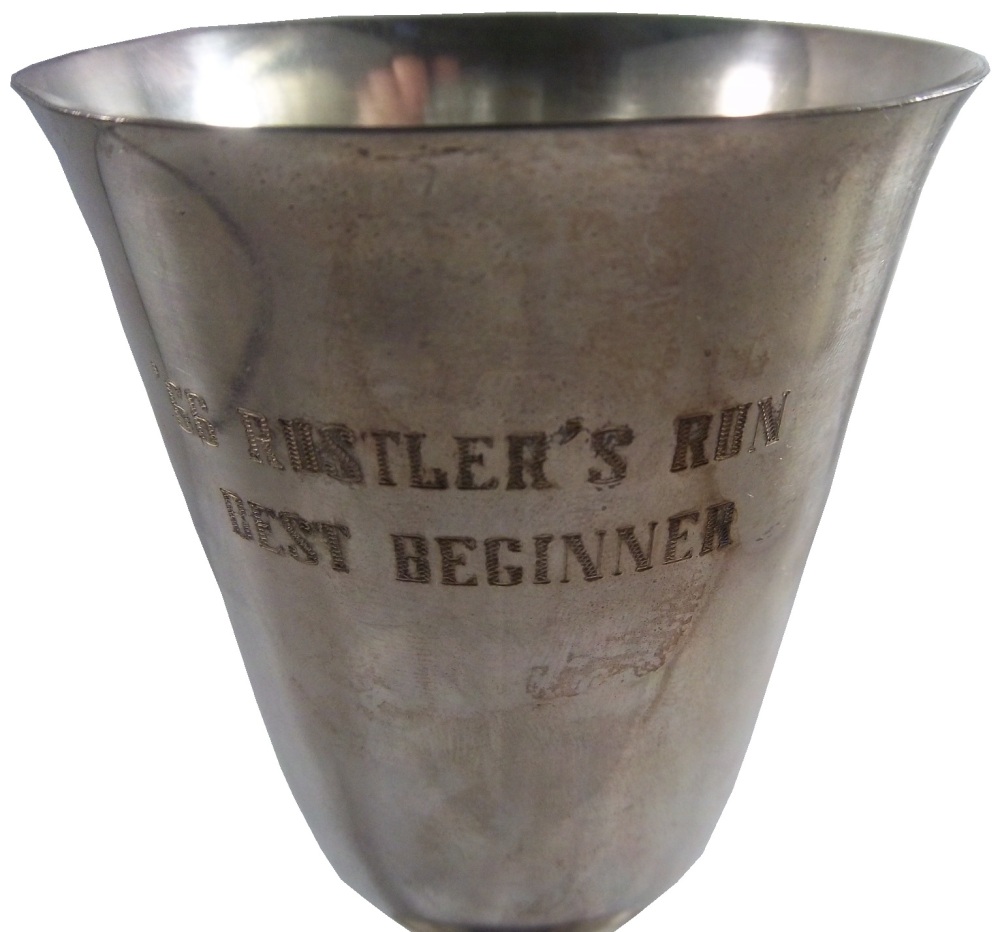 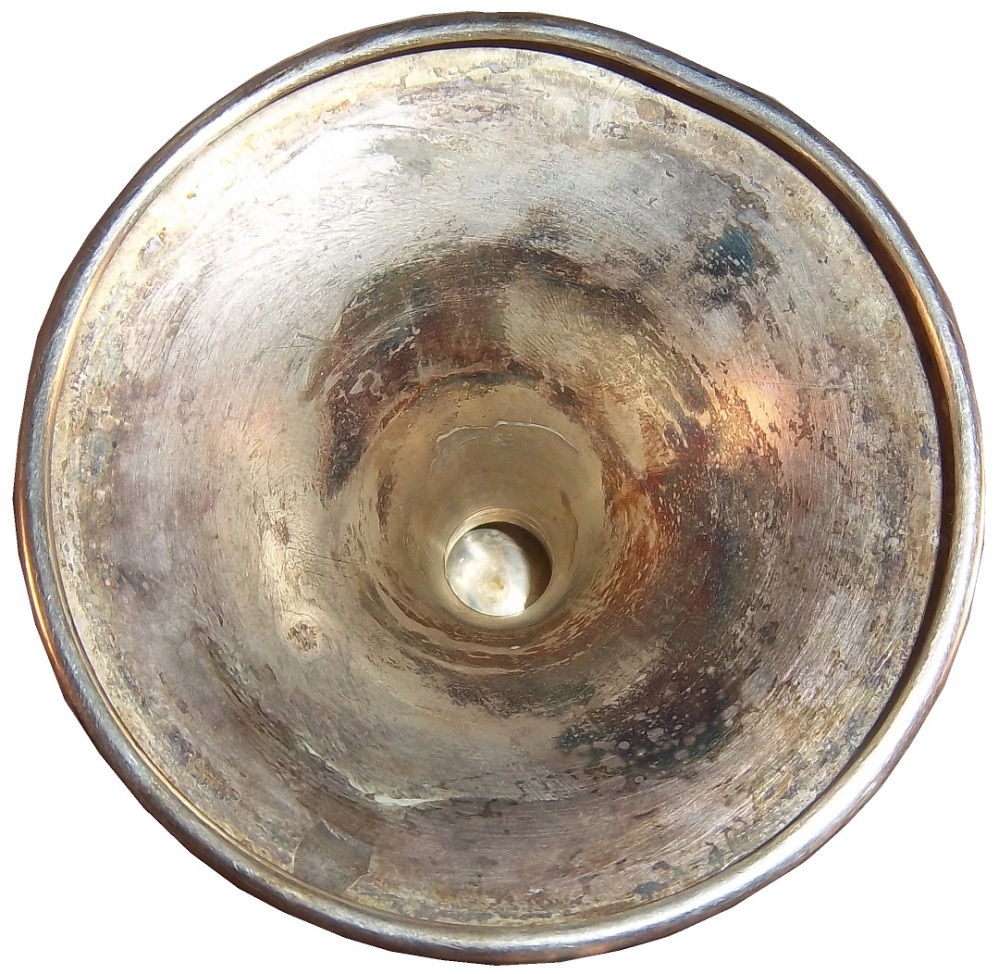 This small wine goblet was awarded El Paisano Rally Race in 1969. It is about 6 inches tall, and like the Ruster’s Run chalice, it shows some stains but is in overall good condition. 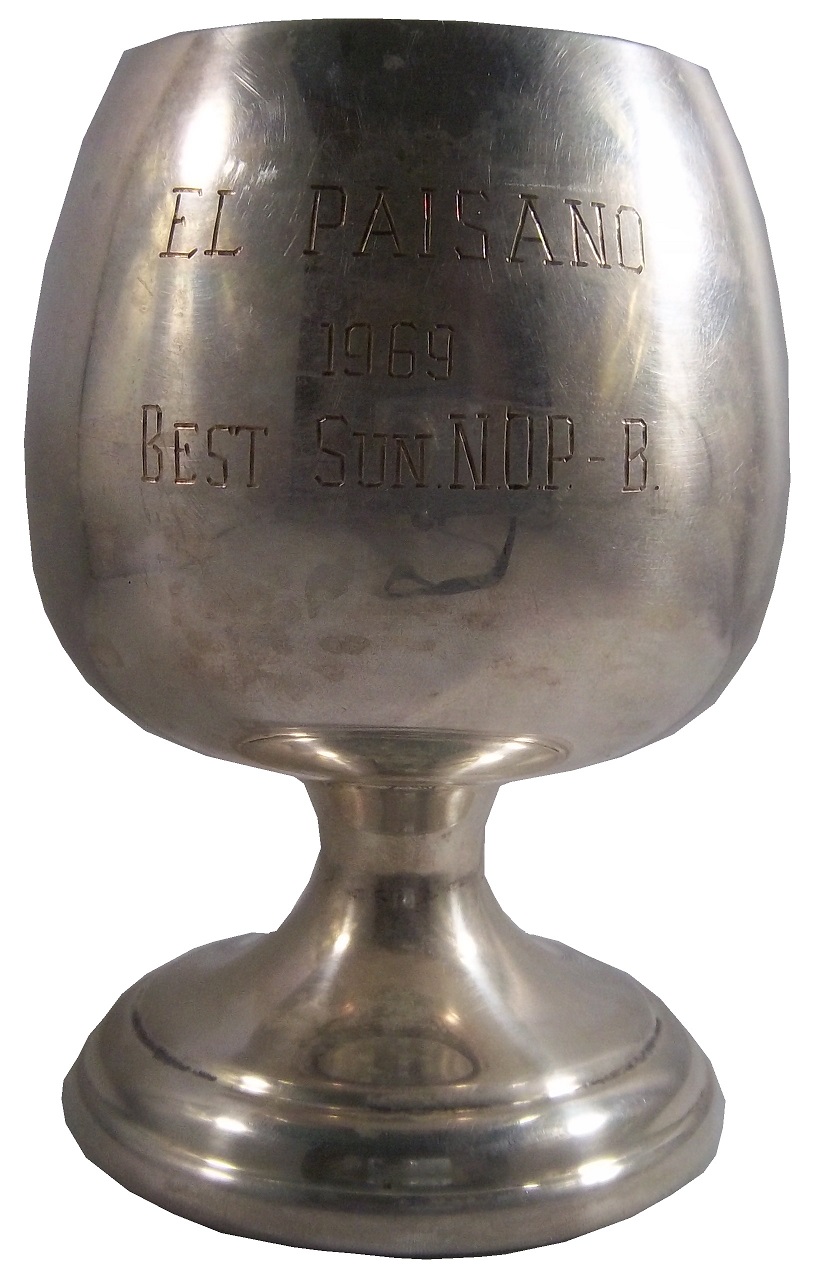 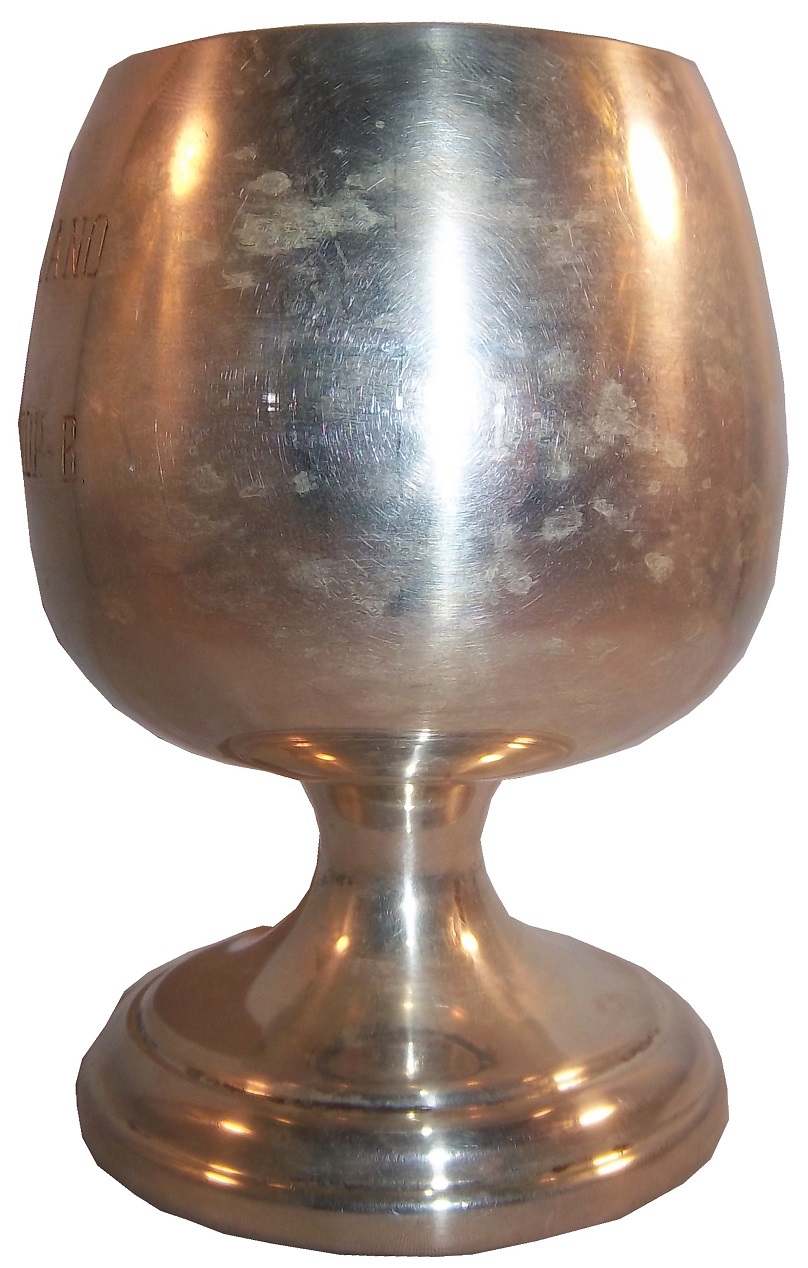 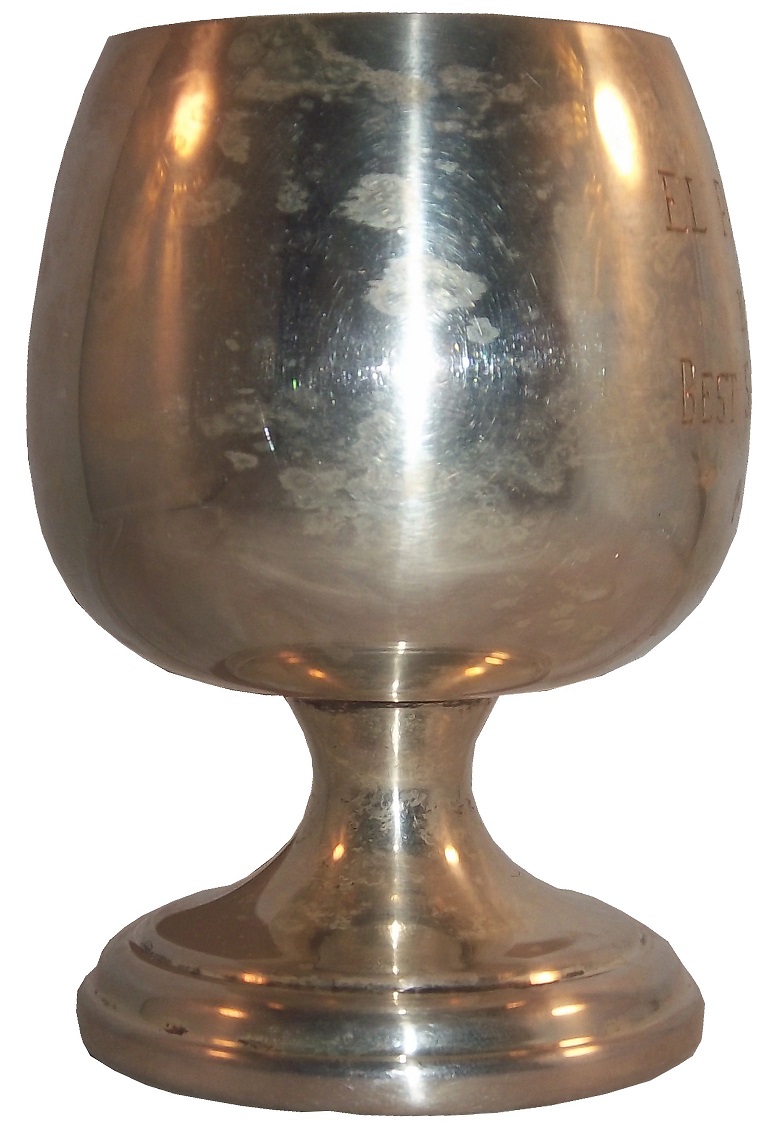 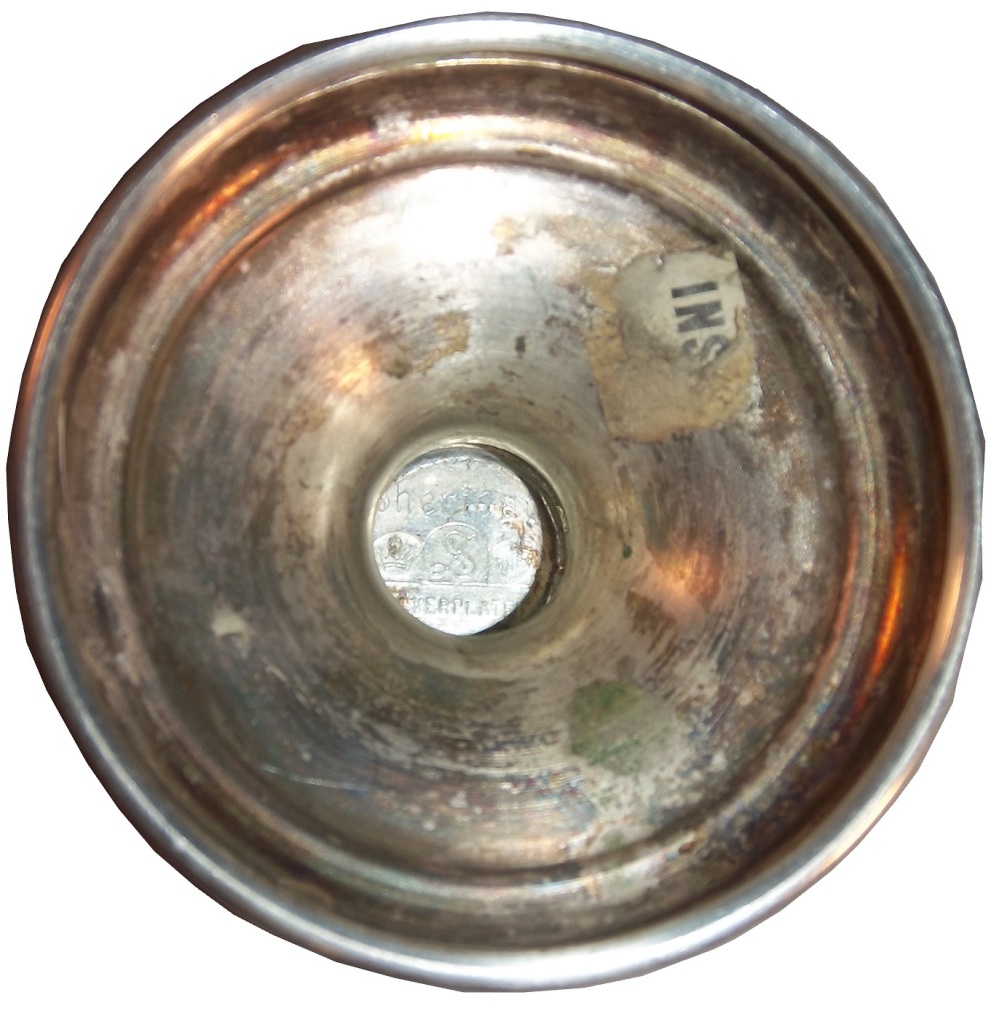 There is something to be said for a traditional trophy. This example is a trophy from Springfield Ozark Dragway, which was for many years, a mainstay of the NHRA. This huge trophy was awarded in the 1960’s to an event winner, and is over 24 inches tall! 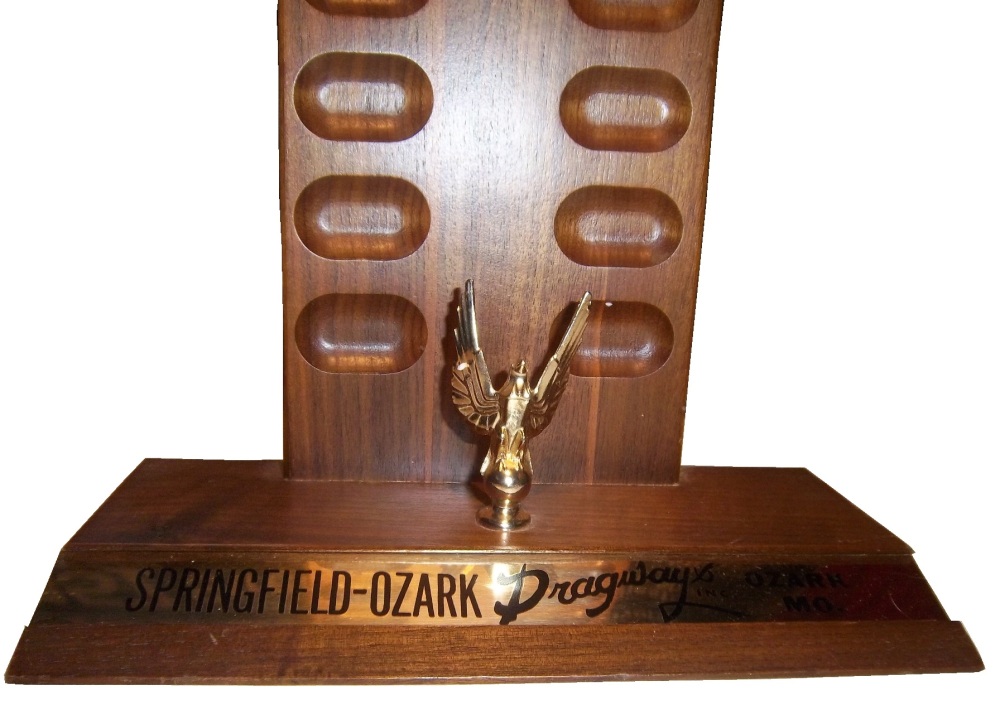 The term “pole position” comes from horse racing, where the fastest qualifying horse would be placed on the inside part of the course, next to the pole. Though Qualifying takes several different forms, all drivers want the pole position.

In 1979, Busch Beer started sponsoring the pole award in the Winston Cup Series, with the pole award winners would race in the Busch Clash, before the Daytona 500. The Busch Clash lasted from 1979 until 1997, when it became the Budweiser Shootout in 2001, to 2012. The sponsorship spread to the Xfinity Series and the Truck Series as well. Anheuser-Busch dropped the sponsorship in 2012, and Molson took over. In the Cup and Xfinity Series, the pole award is sponsored by Coors Light. In the Truck Series, the pole award is sponsored by Keystone Light. With the new sponsor came these small flags given to the drivers and crew members of the pole winners.  In 2018, Coors left, and Busch replaced them. 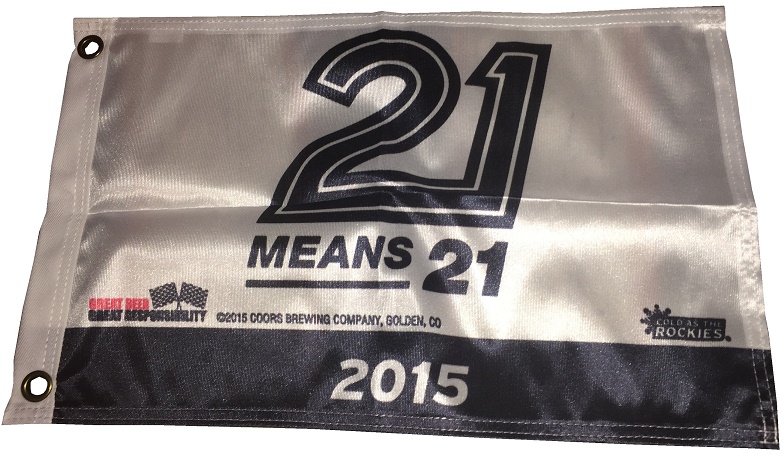 This flag was from 2015 at Dover, and would have been awarded to Denny Hamlin, Matt Kenseth, or Ryan Blaney. It’s the same size as the under 21 flag, The flag is 19 inches long, and 12 inches wide, is only printed on one side, and is in good condition.

These pole award flags are small when compared to a full-sized checkered flag, this one from the 2010 IMSA Continental Tire SportsCar Challenge Miami Grand Prix. 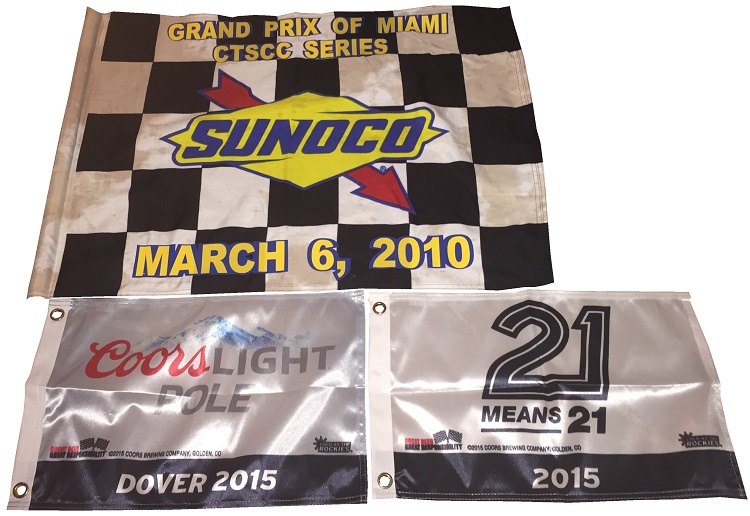 The IMSA Continental Tire SportsCar Challenge has two different classes, “Grand Sport” and “Street Tuner.” Grand Sport or GS features large displacement 6, 8, 10, or 12 cylinder engine sports cars. GS also features small displacement 4-cylinder forced induction sports cars. Street Tuner, or ST features smaller 4-cylinder, 5-cylinder or 6-cylinder sedans, hatchbacks, coupes or convertibles. Though some minor modifications are allowed, for the most part, these cars are identical to their showroom counterparts. These cars aren’t specially built race cars, but the cars that you or I might drive to work in.

Regardless of if drivers are racing professionally for a well-paying, championship caliber team, or a weekend warrior racing for personal glory, there is one thing that they all want in the end. It’s also the most iconic item in auto racing, the checkered flag. As I stated in my Uni-Watch Flag column: “The most iconic flag in motor sports is universally used to indicate that the race has ended. Its exact origins are unknown, but the first picture of a checkered flag being used to end a race was at the 1906 Vanderbilt Cup on Long Island. NASCAR and IndyCar checkered flags carry the Sunoco logo.”

The tradition of the Sunoco logo on the checkered flag was actually started by Unocal. From 1948 to 2003, Unocal was the official fuel sponsor of NASCAR. As such, their logos appeared on the checkered flags during the 1980’s. It was around that same time that the race used flags would be customized with the name of the event, and presented to the driver, a process that continues to this day. One such example is this 2010 IMSA Continental Tire SportsCar Challenge Miami Grand Prix flag.

The second race of the 2010 IMSA Continental Tire SportsCar Challenge was the Miami Grand Prix on March 6, 2010. During that 91 lap race, the #61 Roush Performance Mustang, driven by Billy Johnson, and Jack Roush Jr., won the overall event in GS, and the #25 Freedom Autosport Mazda MX-5 driven by Derek Whitis won ST. As Roush and Johnson were the overall winners, they were presented with this customized Sunoco race winner flag.

The flag shows a heavy amount of use, including numerous stains all over, and some light snagging. The flag features the Sunoco logo on the front. Traditionally, flags are designed so that the pattern starts on the left side, and this flag is no different. The white stripe is the area where the flag pole is inserted. After the race, when the stains occurred, blue and yellow letters were heat-pressed onto the flag, which read “GRAND PRIX OF MIAMI CSTCC SERIES MARCH 6 2010.” 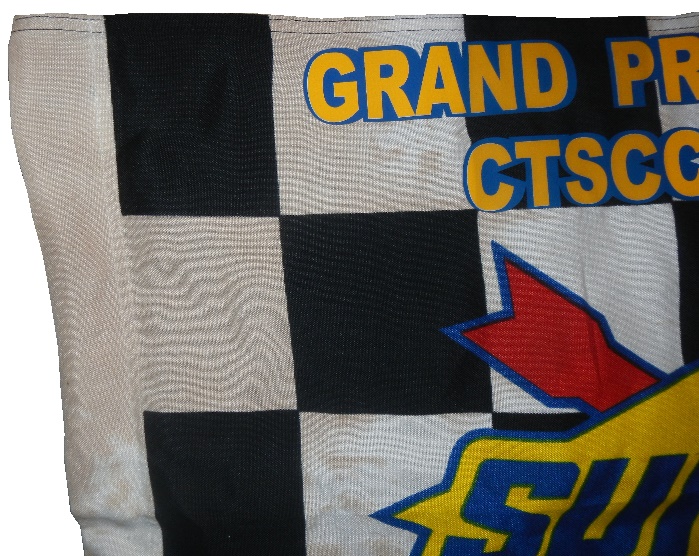 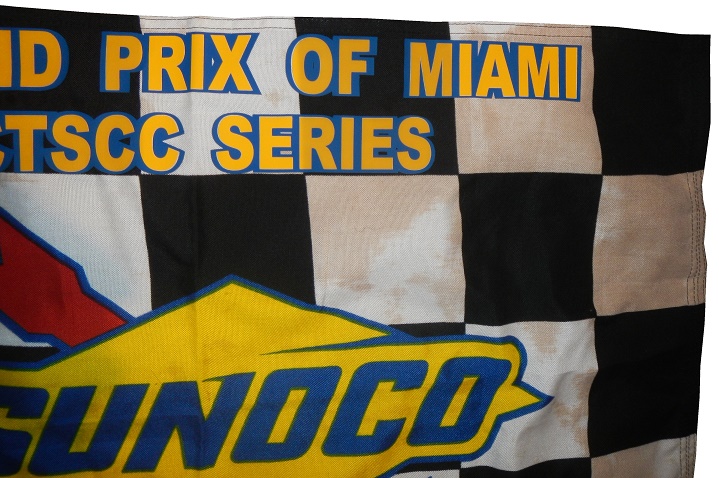 The flag is meant to be displayed with the front only showing, because the back of the flag has the Sunoco logo reversed. The staining present on the front, is clearly visible on the reverse.

Every driver who races wants to be the first one to see that black and white checkered flag. It’s the one hope of all drivers.

Next week, we keep the trophy theme going.